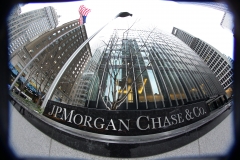 Many correctly see the “Green New Deal” as a great government threat to the nation. The proposed legislation would introduce drastic restrictions on industry and change the American way of life. The culprit of this self-destructive campaign is a government that imposes itself on the population through laws and regulations costing trillions of dollars.

Government can indeed be a threat to business. However, the greater danger to business might well be business. Some large players in the financial markets have the power to be game-changers. They can implement the “Green New Deal” without government, regulations, or AOC.

Big banks are being pressured to engage in this suicidal game. They are asked to start defunding big oil companies, which need credit for major infrastructure projects.

The Rockefeller Offensive Against Oil

The activists in this campaign are not eco-freaks or far-left ideologues. They are members of the left-wing establishment, and some come from well-known business dynasties. A recent op-ed in The New York Times illustrated this point well. It was signed by three fifth-generation members of the Rockefeller family, David Growald, Peter Gill Case, and Valerie Rockefeller.

They call for the death of big oil. The trio acknowledges the role that fossil fuels played in establishing the wealth of their family. After all, oil tycoon J.D. Rockefeller was the founder of Standard Oil Company. Their great-grandfather, John D. Rockefeller, Jr. later helped found what is now JPMorgan Chase Bank, known then as the “Rockefeller bank,” which funneled a lot of capital into the industry.

Nevertheless, these latter-day Rockefellers say the time has come for the big banks to defund the fossil fuels industry. Climate change political correctness dictates that the future must be green. The authors say the bankers must “embrace innovation and move beyond the profits of fossil fuels” to develop models less in line with the Harvard Business School and more in line with the Paris Climate Agreement.

The Reality and Resistance of Big Oil

Weaning big money from big oil is not easy. America runs on oil, and its use is integrated into every part of the economy. Green politics and rhetoric may sound good on paper, but they do not guarantee prosperity in the real world. Since 2016, 35 of the nation’s largest banks have extended $2.7 trillion in credit to the fossil fuel industry and its infrastructure projects.

Ironically, JPMorgan Chase is among the largest lenders, leading the pack with 36 percent more financing than Wells Fargo, the nearest competitor. The finance giant is not alone in refusing to kick the habit. No major American bank has committed to defunding the oil companies.  The Rockefeller authors warn that continuing on this trajectory “will guarantee a world with runaway climate disruption.”

The Rockefellers and the left-wing establishment exert pressure to push through their green revolution from inside the business world. The authors rejoice with the news that JPMorgan Chase announced goals for curtailing its lending activities in line with ecological metrics. However, they lament that there is no commitment from the bank to timelines or specifics. It is “a welcome gesture,” they say, but without real teeth.

A Proposal to Defund Big Oil

Not content with empty promises, the author trio outlines their plans to form BankFWD. It will be a “network of individuals, businesses and foundations [that] will use their banking choices and public standing to persuade major banks to phase out their financing of fossil fuels and lead on climate matters.”

BankFWD counts on a new generation of wealthy patrons who stand to inherit as much as $68 trillion from the richest boomers now in decline. These environmentally enlightened clients will insist that their banks abandon fossil fuels and adopt a zero-carbon future, which will be “the greatest business and technological revolution in history.”

The Ways of Revolution

The authors have tragically subscribed to the false eco-narrative of imminent disaster on the horizon. Their response reflects a suicidal course regarding their wealth. They use their standing as scions of an old oil dynasty family to call for that industry’s own destruction. The tactic of defunding (also used against police) deprives the opposition of the means of survival. In their wrongheaded optimism, they are all too ready to put America under the tyranny of the Paris Climate Agreement.

Thus, radicals promoting the Green New Deal need not rely only on government action to advance their revolution. Radical legislators like AOC might run the eco-reform flag forward, but elements of the left-wing establishment inch toward it and even join the revolution to force society’s change.

In pursuing this course, the trio follows the example of countless others before them in times of revolutions past, like the 1917 Bolshevik Revolution. These revolutions were advanced less by the efforts of so-called oppressed workers or government officials than the suicidal actions of ideologically corrupted and rotten elites who toiled happily for their own self-destruction.