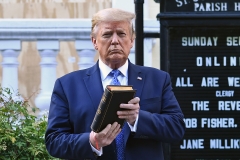 Public trust in the establishment media has been cratering for years and that trend is not without cause.  News reporting continues to be done with kneejerk reactions, little concern for reality, and too often for partisan purposes.

More evidence of such media malfeasance came out Wednesday in the form of a report from the Interior Department’s Inspector General. The report concluded that the United States Park Police did not remove unruly demonstrators from Lafayette Park near the White House a year ago to allow then-President Donald Trump a photo op near an arson-damaged church.

News editors at the time bellowed headlines of outrage. The New York Times headline read, “Protesters Dispersed With Tear Gas So Trump Could Pose at Church.” CNN’s coverage featured an on-screen graphic that read, “Peaceful protesters near White House tear-gassed, shot with rubber bullets so Trump can have church photo op.” Other news outlets blared the same general conclusion. The chosen narrative was established and the message stuck in the minds of countless news consumers coast to coast.

The establishment media had quickly jumped to conclusion last June, too eager to create a narrative that Trump was using the U.S. Park Police for selfish promotional purposes and abusing supposedly peaceful demonstrators. The recently released Inspector General’s report explains the plans for clearing Lafayette Park were put in place well in advance of Trump’s evening stroll to the church, and that police had the authority to clear the area for security reasons.

The media failed its Logic 101 exam for that event, assuming that because one event followed another, there must necessarily be causation. News reporting at the time also failed to acknowledge that the U.S. Park Police had solid reasons to expand the security perimeter near the White House, after numerous incidents of chaos in that section of the district. Those security steps, as is known now from the Inspector General’s report, were being implemented without directions from the White House.

But the media was too compelled, as usual, to make everything about Trump. The press relied on unnamed White House sources to create the unfounded narrative that the park was being cleared of demonstrators solely for a Trump photo op.

The Trump handlers, for their part, also blundered that evening, failing to recognize how damaging the optics could be of a presidential pseudo-event taking place after the removal of protestors from a public park. The timing of Trump’s appearance created a bizarre scene for which an upside was difficult to find.

That doesn’t excuse the media’s distorted narrative that surely played a role during the 2020 presidential campaign. Trump supporters might well have viewed that iconic photo op as a sign of Trump standing up to the civil unrest. The media narrative that likely stuck in the minds of swing voters and anti-Trump voters, however, was Trump using federal machinery to punish protesters so he could take publicity photos near a church. That was the clear message from a conspiratorial press with a pack mentality. Turns out that narrative was incorrect, concocted by a press corps eager to take sides and placate the Trump resistance.

The media focus on the Trump photo session distracted from coverage of the chaotic protests, for one thing, but it also gave a big win to the Biden campaign.  The Biden campaign was being orchestrated from a basement in Delaware. That strategy turned out to be golden. No need for the Democrat presidential nominee to say or do anything when the establishment press can jump to conclusions and promote unfounded storylines that are only corrected a year later, well after election season has ended.

Even now, many news consumers will never know about this report from the Interior Department’s inspector general. Media outlets seldom provide corrections with the intensity of original reporting, no matter how inaccurate the first story was. Establishment news outlets, sadly, are more committed to conjured narratives than reality. That’s a sad reflection on today’s journalism profession, but tells news consumers a lot about the people providing their “news.”