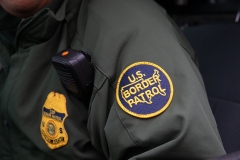 President Joe Biden is about to blow open the floodgates on illegal immigration at the border, and the governor of Texas is vowing to push back.

That may not resolve the issue, but at least it sends a message to Washington that this is a Washington-caused crisis that’s becoming intolerable for beleaguered border states.

In response to the Texas governor, a White House spokesman said that “enforcement of our country’s immigration laws lies with the federal government, not a state.”

At this point, however, “enforcement” seems like a poor choice of a word for describing what the Biden Administration is doing at the border.

The Centers for Disease Control and Prevention recently announced it would revoke Title 42, a public health policy that has been one of the few effective tools to control the massive flow of illegal immigrants that began when Biden became president on Jan. 20, 2021.

The administrative rule, set for revocation May 23, was created by President Donald Trump’s administration and allowed for the rapid deportation of illegal immigrants coming from countries with an active COVID-19 pandemic.

Homeland Security Secretary Alejandro Mayorkas said in a statement that the administration plans to deport illegal immigrants regardless of the rule change, but given what’s happened in the past year, it’s hard to take that promise seriously.

As I wrote just before the Biden Administration announced its intention to drop the rule, we are already looking at a huge, protracted problem at the border, a problem that the federal government has greatly exacerbated.

Since Biden became president, there’s been an explosion of crossings at the southern border, the likes of which we haven’t seen in decades. Ending Title 42 removes one of the few brakes on what has become a floodtide of migrants illegally pouring into the United States.

How bad is it going to get? It’s hard to say precisely, but given that we are already sustaining record numbers of border crossings, the next wave could be historic.

Currently, more than half of all illegal border crossing encounters end up as Title 42 expulsions, according to the Border Patrol. On top of that, many more migrants will be encouraged to make the border crossing, knowing that the rule has been lifted.

The Department of Homeland Security has said that it is planning to process about 18,000 migrants a day, double the current number. When White House press secretary Jen Psaki was questioned about that number, she appeared to be completely clueless about it and denied that was the likely outcome.

👀 Peter Doocy: What's your plan for the 18,000 illegal aliens a day crossing the border after Title 42 ends?

Psaki: I don't know where you're getting that number.

But if those numbers hold up, it means that about half a million people could be coming across the border every month. That would not just break records, it would shatter them.

While the White House may be in denial, it’s clear that Texas and other border states are on high alert.

Texas National Guard soldiers in riot gear running drills in the RGV on how to respond to a “mass migration” event when Title 42 drops next month.
DHS projects up to 18,000 illegal crossings per *day* when that time comes. That’s more than double the current volume. @FoxNews pic.twitter.com/8Or3KCEUP0

The Border Patrol is stretched to its limits, and border states are swamped with the responsibility of handling a humanitarian crisis that’s apparently about to get much worse.

Even some Democrats are fretting about the consequences of the policy change.

Arizona’s two Democratic senators, Kyrsten Sinema and Mark Kelly, already have expressed their opposition, and others are now joining in.

Sen. Raphael Warnock (D-GA), hardly a moderate, released a statement saying that he’s also against ending Title 42 at this time. Kelly and Warnock both are up for reelection in November.

The Georgia pastor is doubling down on his opposition to reversing the Trump era public health #immigration policy Title 42.

“Senator Warnock does not support lifting Title 42 at this time."

Biden appears to be caving to the Democratic Party’s extreme left flank on illegal immigration. That has been the case consistently since he entered office. One border enforcement policy after another has been jettisoned by his administration as the crisis has intensified.

Biden came into office calling for a 100-day moratorium on all deportations. Over the past year, interior enforcement of immigration laws has been almost entirely turned off, part of the systematic abuse of executive branch “prosecutorial discretion.”

President Biden chose to end the “Remain in Mexico” policy of his predecessor, President Trump, which had proven effective in re-establishing control of the border from illegal migrants’ rampant abuse of American asylum laws.

And now the administration intends to end Title 42.

If the Biden Administration was just dropping the policy because it was acknowledging that the COVID-19 pandemic was over, then why continue the student loan repayment moratorium, which will now extend to the end of August? Why keep a whole host of other COVID-19 policies in place?

Just weeks ago, Biden announced that the pandemic wasn’t over and launched a new government website on COVID-19.

The bottom line is that the Biden Administration is selective and arbitrary in how it treats the issue.

Three states have joined in a lawsuit to halt the administration’s order on Title 42. In addition, a bipartisan group of senators reportedly will back legislation that would block discontinuation of the policy.

Unfortunately, due to the Biden Administration’s decisions, it’s almost certain that in the very near term, we will likely see the most acute border crisis in our lifetimes take a turn for the (even) worse.