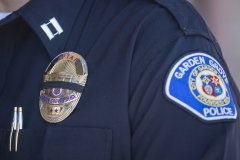 A recent New York Times article by Jeremy W. Peters claims it is a “fact” “that black people suffer disproportionately from police brutality.” He also asserts that President Donald Trump’s rejection of this accusation is “racially inflammatory.” To the contrary, comprehensive facts show that this allegation against police is false. Furthermore, this deception has stoked racial divides and driven people to despise and even murder police officers.

In an interview with CBS News that aired Wednesday night, reporter Catherine Herridge asked Trump, “Why are African-Americans still dying at the hands of law enforcement in this country?” He responded that this is a “terrible question” and that “more white people” are killed by police than black people.

The New York Times and many other media outlets are criticizing Trump’s response because blacks are a much smaller portion of the U.S. population than whites. Thus, the odds of being killed by police are higher for each black person than each white person. This frequent argument is highly misleading because it omits facts that are vital to this issue. As detailed in a 2018 paper in the journal Social Psychological and Personality Science:

The facts about murder and police killings underscore this reality. Black people represent about 13% of the U.S. population, at least 53% of murder offenders, and roughly 33% of people killed by police.

The Supreme Court’s 1895 ruling in Tennessee v. Garner  forbids police from using lethal force except in situations where there is a genuine risk of “death or serious physical injury.” In 2015, the Washington Post found that over the prior decade an average of about five police officers per year were indicted for violating this standard, and only one per year was convicted.

Likewise, a study conducted by the left-leaning Center for Policing Equity reveals that police are 42 percent less likely to use lethal force when arresting black people than when arresting whites. Yet, the authors of this study buried that data on the 19th page of a 29-page report and wrote an overview that gives the opposing impression.

Taken together, the facts above disprove the claim that “black people suffer disproportionately from police brutality.” Yet media outlets routinely ignore these facts or report them in isolation so that their implications are obscured. Meanwhile, they widely spread the counterfactual message that has inspired racial strife, hatred of the police, and slayings of officers. For example:

Beyond this, the Times and other media outlets that propagate those racially provocative falsehoods are accusing people who challenge them of stirring racial hostilities.

There are more than 800,000 sworn law enforcement officers in the U.S. and they are convicted of fatal shootings roughly once per year. This amounts to an annual murder rate of 0.13 per 100,000—or about 38 times lower than the general U.S. murder rate of 5.0 per 100,000. Police are vetted for criminality, and thus, they should be much less likely to commit murder than the average person. However, police are also faced with life-threatening situations more often than the general public, and this opens doors for violent tendencies to emerge.

Regardless, it is irrational to accuse police or any other group of people of brutality or systemic racism based on the actions of an infinitesimal portion of them. Yet the media and activists repeatedly do this, even though it is a hallmark tactic of racists and demagogues.