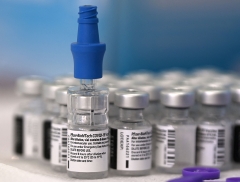 Picture of vials of the Pfizer-BioNTech vaccine against COVID-19 taken as elderly people are being inoculated. (Photo credit: LUIS ACOSTA/AFP via Getty Images)

Rhode Island excluded whites from vaccinations given out at Providence's Dunkin Donuts Center on April 10, where 3,000 doses were available. As a result, many of those doses were left unused.

As Erika Sanzi of Parents Defending Education notes, this vaccination "event was only for BIPOC residents of the state —they ended up with tons left over. So many people desperate to get one but can't because" of so-called "equity." To get the vaccine, you had to be "Black, Indigenous, Asian, Hispanic" or "People of Color."

The total exclusion of whites was unnecessary to help minorities. But Rhode Island has reserved 12,000 doses for minorities only, in Providence and Woonsocket.

This was discrimination for discrimination's sake, so it was doubly unconstitutional. Rhode Island didn't have a "strong basis in evidence" for giving minorities a preference at all. But even if minorities deserved a preference, to ensure that they would get the vaccine, totally excluding whites made no sense, because that wasted many doses of the vaccine.

Even in situations where a minority preference is permitted by the courts, the preference has to be limited: According to the courts, a policy of preferring minorities can only be upheld if the policy contains some "flexibility," such as "waivers if the goal" of minority participation "cannot be met," and only if "the burden of the policy on innocent third parties" is justifiable. (See Tuttle v. Arlington County School  Board (1999)).

Rhode Island's policy flunked those legal requirements. It was so rigid and inflexible that it didn't waive the exclusion of whites even when the goal of handing out 3,000 doses to minorities couldn't be met because not enough minorities were showing up.

Not vaccinating these white people didn't help minorities, but actually hurt them. Unvaccinated white people can spread the coronavirus to minorities with whom they come into contact. So excluding whites harmed "innocent third parties" of all races, including people of color.

As I explain below, Rhode Island had no basis for giving any minorities any preference at all. Yet it gave all racial minority groups a preference.

To legally give minority groups a preference, a state has to be seeking to remedy the present effects of its own past discrimination against those particular minority groups. According to the Supreme Court, a state has to “identify” evidence of its own discrimination, with “specificity” “before it embarks on an affirmative-action program.” If it doesn’t point to such a “strong basis in evidence” before it adopts a racial preference for minorities, then the preference is illegal, even if evidence of discrimination later is found. (See Shaw v. Hunt (1996)).

A state can only give preference to the particular minority groups it discriminated against, not all minority groups. For example, a history of discrimination against blacks doesn’t justify a preference for Asians. A court relied on that principle to strike down an entire affirmative action program that covered all non-whites. (See L. Feriozzi Concrete Co. v. Casino Reinvestment Dev. Auth. (2001)).

But Rhode Island ignored that legal principle. It gave a racial preference to all minority groups -- even groups like Asians that are dying of COVID at a much lower rate than whites. So even if higher minority death rates were due to discrimination (which they generally are not), that would not be a reason to give minority groups with lower death rates than whites a preference.

Lower vaccination rates among blacks reflected reluctance to take the vaccine, rather than racial bias in administering the vaccine. Surveys showed blacks were far more reluctant than whites to take the vaccine when it first became available. Higher COVID rates among blacks and Hispanics in many states have resulted from occupational and other non-racial risk factors, rather than discrimination by state governments.

Rhode Island is not the only state wasting precious vaccine doses. In early April, Virginia wasted at least 11,000 vaccine doses by limiting access to the vaccine. It did that by making it harder for out-of-town, mostly white people to obtain vaccines at a clinic located in a majority-black town whose residents were reluctant to get the vaccine.