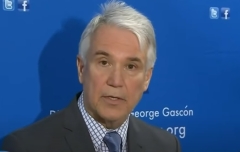 "Los Angeles County will pay for the funeral of a gang member who died in a police shootout after killing two officers, according to a mandate issued by beleaguered District Attorney George Gascon," reports the Washington Examiner.

"Gascon, who has been sued by his own prosecutors and blasted by law enforcement due to policies seen as anti-victim, issued a directive on Dec. 7, 2020, that funds funerals, burials, and mental health services for 'individuals killed by police' and others.

“'It is so far from my way of thinking [that] I can’t imagine such a concept,' former Los Angeles County District Attorney Steve Cooley told the Washington Examiner. 'This is beyond disgusting. It insults the memories of the two fallen officers. Shame on Gascon.'

"Officers Michael Paredes and Joseph Santana were shot to death Tuesday night by Justin Flores when they responded to a 911 call at a motel room in the Los Angeles suburb of El Monte. Flores opened fire on the pair when he opened the door to his room and was later shot to death by additional officers in the parking lot, Los Angeles County Sheriff Alex Villanueva said.

"Anger surrounding the deaths intensified within the DA’s office and law enforcement when news broke that Flores was given a sentencing deal on a gun charge last year that resulted in 20 days in jail instead of three years. [Gascon] also refused to file a violent felony 'strike' in a prior case that adds substantial prison time, according to court records.

"If Gascon had not low-balled those two cases, Flores would still be in custody this week, Cooley said."

“We conclude the voters and the Legislature created a duty...that requires prosecutors to plead prior serious or violent felony convictions to ensure the alternative sentencing scheme created by the three strikes law applies to repeat offenders,” the appeals court stated. “The district attorney overstates his authority. He is an elected official who must comply with the law, not a sovereign with absolute, unreviewable discretion.”

However, it also ruled that the district attorney’s office only has a duty to “plead” prior convictions, not “prove” them. And the court ruled that deputy prosecutors couldn’t sue Gascón over his directive telling prosecutors to ask judges to dismiss prior convictions and penalty enhancements “in the interests of justice.” (Judges don't have to grant such requests). Thus, the appeals court gave Gascón some leeway to coddle offenders, despite the seemingly mandatory language of the three-strikes law.

As the Washington Examiner notes, Gascón’s “claims about the worthlessness of tough sentencing are ludicrous. For the quarter-century before California voters enacted the three-strikes law in 1994, the rate of violent and property crimes exceeded 5,000 per 100,000 California residents.” After the three-strikes law was enacted, the crime “rate then dropped precipitously.”

But after Gascón took office, and issued Special Directive 20-08 blocking enforcement of the three-strikes law and other penalties for repeat offenders, “that good trend reversed,” and violence increased.

Because a small number of repeat offenders account for a disproportionately large fraction of serious crimes, it is vitally important to increase penalties for repeat offenders.

“Only a tiny fraction, as low as 1% of the population, commit most crime, especially violent offenses,” notes Sean Kennedy, of the Maryland Public Policy Institute. “Critically, criminals often escalate the seriousness of their offenses toward acts of violence over their criminal careers until they are ‘incapacitated’ or imprisoned for lengthy terms.”

Studies indicate that longer periods of incarceration deter many crimes from being committed, both by people who have never committed a crime before, and by potential repeat offenders. For example, a National Bureau of Economic Research study found that longer sentences for second-time offenders and other repeat offenders contained in a 1982 California law deterred people from committing murder, robbery, and rape.

A 2021 study found that when New York stopped prosecuting 16 and 17-year-olds as adults for most offenses, resulting in them spending less time incarcerated, their recidivism rates shot up. As Peter Moskos notes, “Recidivism among 16-year-olds went up” from 39% to 48% for offenses generally, and from 18% to 27% for violent felony offenses.