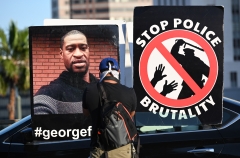 Joe Biden backs a police reform bill that could lead to more racial and sexual profiling, such as gender-based stops of female motorists. NBC News reports that the "Biden administration on Monday threw its support behind" the George Floyd Justice in Policing Act. The administration says this bill is needed to tackle "systemic racism – in police departments."

Section 311 of the Act forbids what it calls “racial profiling.” This is defined to include not just race, but also “gender” in Section 302(a)(6) of the bill. But it defines "profiling" in such a crudely-mechanical way that actually encourages profiling, rather than outlawing it.

Under the bill, what matters is numbers and racial bean-counting, not actual racism or sexism. “Disparate impact” in police stops or interviews based on race or gender — for example, stopping more men than women, or interviewing more blacks than Asians or whites — is defined as “prima facie evidence” of a “violation.” That means that numbers alone are enough for a judge to find a police department in violation of the Act. Prima facie evidence is a legal term meaning that the person suing has provided enough evidence to prove something, in the absence of proof to the contrary by the entity being sued, which bears the burden of proving itself innocent.

The bill's strange definition of profiling would render all police departments presumptively in violation of the Act, because men speed more than women virtually everywhere (which is one reason that auto insurance companies charge men more than women — men are more likely to get into a destructive high-speed crash), and violate traffic laws more than women (for example, men wear seat belts at a lower rate). Men also commit crimes at a higher rate. Yet stopping men at a higher rate would be deemed suspect under the bill.

The bill also ignores the fact that there are racial differences in crime rates and traffic violations. Different races wear their seat belts at different rates. Asians have the lowest crime rate, on average, while blacks generally have the highest, and whites are in between. As the Supreme Court noted in U.S. v. Armstrong, crime rates differ by race. That's why arrest rates differ by race, as a recent federal study of violent crime shows. Yet the bill treats stopping fewer Asians than whites, or fewer whites than blacks, as suspicious.

So all police departments everywhere are presumptively guilty under the bill. The bill doesn’t explain how they can possibly rebut this presumption of guilt or prove themselves innocent. So if they wish to avoid being sued, and avoid being forced to pay the attorneys fees and expert-witness costs of the person suing them, police departments will have an incentive under the bill to stop only as many men as women — even if more men are speeding or committing crimes — and to adopt racial quotas in police stops.

That could undermine road safety by encouraging police to ignore speeding or other violations just because they were committed by members of a particular gender or race. (The bill does say that police can search for offenders of particular races if an offender with that racial characteristic was involved in an “identified criminal incident.” But speeding is usually not a criminal offense.)

It is unconstitutional to have racial quotas in punishment or arrests. For example, an appeals court ruled it was unconstitutional to require a local government not to punish a higher percentage of one race than another race because that amounted to a racial quota. The court struck down as unconstitutional a provision that forbade a “school district to refer a higher percentage of minority students than of white students for discipline unless the district purges all ‘subjective’ criteria from its disciplinary code,” concluding that that constituted a forbidden racial quota. As it noted, “racial disciplinary quotas violate equity” by “either systematically overpunishing the innocent or systematically underpunishing the guilty.” (People Who Care v. Rockford Board of Education (1997)).

One could argue that the Justice in Policing Act only encourages — rather than requires — quotas. That's because numbers amount only to “prima facie evidence,” not conclusive evidence. But even incentives to have quotas are unconstitutional. An appeals court ruled that it is unconstitutional to incentivize racial and gender quotas through investigations and audits, even if they aren’t strictly required. (See Lutheran Church-Missouri Synod v. FCC (1998).