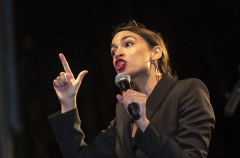 Twitter has banned some conservatives like Michael Flynn and Sidney Powell, while letting human-rights violators like Iran's Ayatollah Khamenei continue to tweet. Facebook recently removed the conservative WalkAway page, along with hundreds of thousands of videos and followers. A conservative social media application with millions of users -- Parler -- has been banned by Google, Amazon, and Apple. Donald Trump has been banned from Twitter, Facebook, and Snapchat.

The First Amendment only restricts what the government can do -- not private companies. Facebook, Google, and Twitter are private companies, so if they voluntarily ban Trump, or conservative figures, that doesn't violate free speech. Courts have made that clear in rulings such as Prager University v. Google (2020).

But what if Facebook is banning people not because it wants to, but because it knows that's what progressive government officials want, and they've previously made that clear? That would violate the First Amendment -- especially if Facebook is afraid of government reprisals if it doesn't censor more conservative speech. Such reprisals could include progressive lawmakers taking away social media companies' Section 230 protection against lawsuits, as Joe Biden wishes to do.

Democrats like Congresswoman Alexandria Ocasio-Cortez called on Apple and Google Play to take action against Parler, which they did.

As journalist Glenn Greenwald notes, progressives themselves are celebrating the banning of conservatives as a sign that social media companies are doing the bidding of the Democratic Party, which will control both Congress and the presidency starting in late January:

Here's @jmpalmieri -- long-time close Clinton aide and Dem operative -- explicitly *boasting* that FB and other Silicon Valley monopolies are now censorsing conservatives because Dems are now in charge of Congress & they want to aggrandize the powerful:https://t.co/v9V9uo1gaa

At congressional hearings, Democratic lawmakers have consistently pressured social media giants to restrict more speech, such as "hate speech." As NBC notes, when the Senate compelled three social media CEOs to testify, Democrats "focused their criticism of social media" companies on failure to prevent "hate speech." "They have criticized Big Tech CEOs for failing to police content, homing in on the platforms' role in" the alleged "rise of white nationalism in the U.S." And as TechDirt notes, "some Democratic members of Congress think that they don't censor enough" when it comes to misinformation. Never mind that the Supreme Court has ruled that there is no “hate speech” exception to the First Amendment, which protects speech that offends minority groups.

On campus, pro-Trump messages have been classified by progressive college officials as hate speech. “Hate speech” is now broadly “defined” by many to include “offensive words, about or directed towards historically victimized groups," according to Samuel Walker.

Many truths are "offensive" to some listeners, and thus susceptible to being classified as "hate speech." For example, when a black lawyer noted that the crime rate is higher among blacks than whites, his blog post "Jailing Violent Criminals Is Appropriate," was classified by a taxpayer-subsidized group, in the Global Disinformation Index, as being hateful "white supremacy content" that social media giants should not advertise next to. The blog post was classified as hateful, even though it was factual, sedate, non-inflammatory, and cited federal crime statistics and a Supreme Court ruling noting that crime rates are indeed different for blacks and whites. The blog post also noted that Asians have a lower rate of misbehavior than whites, yet it was classified as "white supremacist."

The concept of hate speech has expanded among progressives to include commonplace conservative views about racial or sexual subjects. That includes criticizing feminism, affirmative action, homosexuality, or gay marriage, or opinions about how to address sexual harassment or allegations of racism in the criminal justice system.

For example, the federal appeals court in New York ruled that a city official’s letter urging a billboard company to stop displaying a church’s anti-homosexuality billboard potentially violated the First Amendment, since the letter cited his “official authority as ‘Borough President of Staten Island’" and thus could constitute an “implicit” threat, even though the official lacked direct regulatory authority over the billboard company and did not explicitly threaten any reprisals. (See Okwedy v. Molinari, 333 F.3d 339 (2d Cir. 2003)).

Similarly, it potentially violated the First Amendment when a village official wrote a letter to the Chamber of Commerce criticizing it for publishing a businessman's ad critical of village policies in the Chamber's publication. An appeals court ruled the letter could be interpreted as a veiled threat of boycott or reprisal (See Rattner v. Netburn, 930 F.2d 204 (2d Cir. 1991)).

Government retaliation for speech does not need to include fines or criminal prosecution to violate the First Amendment. For example, if the government merely reprimands a public employee for his speech or censures a private citizen for his speech, some courts find that to be a violation of the First Amendment. (See Columbus Education Association v. Columbus Board of Education, 623 F.2d 1155 (6th Cir. 1980); Little v. N. Miami, 805 F.2d 962 (11th Cir. 1986)).

If Facebook starts banning lots of conservatives, that may be a sign that it feels pressured by progressive officials. After all, conservative users generate a lot of Facebook's profits, because the most heavily-shared Facebook posts tend to be conservative, such as posts linking to Ben Shapiro's Daily Wire. So Facebook has little incentive to ban many conservatives voluntarily, in the absence of veiled government pressure.