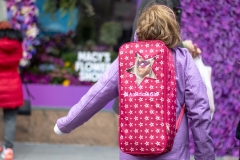 For decades, the feminist movement in America worked tirelessly to empower women and young girls. In the 1970s, Title IX was passed to guarantee equal access for women in educational programs, including sports. It opened up many more opportunities for women and young girls with big dreams.
It was a major milestone when Ronald Reagan nominated Sandra Day O’Connor to the Supreme Court in 1981. It was a big deal when Geraldine Ferraro was selected as a vice presidential running mate in 1984.
These were historic “firsts” in the advancement of “women’s rights.” We rightly told our daughters and granddaughters that they could be anything they wanted to be. But the evolution of “rights” has mutated into something that most Americans just don’t recognize. Now, we have a Supreme Court justice who can’t define what a woman is (That will make future Title IX hearings difficult!).
Progressives today are telling boys that they can be girls and compete against them for sports titles and athletic scholarships. And it’s not enough to empower young girls to be strong, confident women. Some radicals literally want to turn girls into boys.
That would seem to be the ultimate betrayal of the feminist movement. So much for “Fight the Patriarchy!” The radical transgender movement is telling young girls, “Embrace the Patriarchy! You too can be a man!”
This insanity isn’t helping girls at all. In fact, it’s putting them in danger and crushing their dreams.
The school board in Loudoun County, Virginia, just fired its superintendent of schools after a grand jury concluded he failed to protect the welfare of children. How so? He covered up two sexual assaults committed by a boy who claims to be a girl and entered the girls’ bathrooms to commit the assaults.
Meanwhile, promising young female athletes, who have trained hard for years, are losing competitions and college scholarships to mediocre men like “Lia Thomas.”
The hopes and dreams of these young women are being stolen from them by small, petty liars – biological men who are making themselves feel better by “beating up” on women in sports.
As radical gender ideology has been pushed into our schools and children’s cartoons, conservatives have angered progressives by using the term “groomer” in public debates about drag queen story hour and what should be taught in our elementary schools.

To paraphrase Shakespeare, “The left doth protest too much, methinks.” Why else are so many on the left so determined to target children with this nonsense if they are not “grooming” them to accept it?
One effort to confuse and groom our children comes from a once iconic company, American Girl.
It published a book telling young girls that if they feel like they are in the wrong body, they can respect themselves by delaying puberty. And if their parents don’t understand, there are other adults they can turn to (Telling kids not to trust their parents and to trust strangers on matters of sex is the very definition grooming.).
This is a bizarre fringe position that most Americans adamantly oppose. But, sadly, American Girl has joined a growing list of American corporations, including Disney, that have sold out to the woke leftist mob that is determined to impose its values on our children.
I am often asked by concerned Americans, “How can we fight back? What can I do to save our country?
Here’s one action item: If you’re still doing your Christmas shopping for your daughter
or granddaughter, do not buy another American Girl doll. No matter how much she may want one, DON’T DO IT! If you already purchased one, return it.
Don’t subsidize a company that has declared war on you and your values. Don’t support a company that is willing to deceive your daughter and destroy her body by turning her into something she can never be – a fake boy!
More importantly, do not be afraid to speak out against radical gender ideology. More and more “de-transitioners,” like Chris Beck and Chloe Cole, are coming forward to tell their stories about how the left lied to them and ruined their lives.
Parents, do not be afraid to protect your children from leftist groomers whether they are in the classroom or the corporate boardroom.