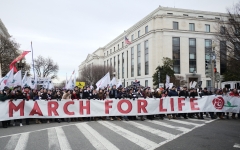 Today is one of the highlights of my year.  It's the annual March for Life!

Hundreds of thousands of people, including many young women, came to Washington, D.C., braving the winter weather, to defend innocent preborn babies.  I was honored to join them on the National Mall.

This annual march is unlike any other demonstration that takes place in Washington. Marches and protests happen here regularly.  But most demonstrators are almost always seeking some sort of action or policy that benefits them.  And that's totally fine in a free society.

But the March For Life is different.  Today's marchers are not asking for any monetary or policy benefit for themselves.  Their bank accounts won't get bigger if they are successful.  They are marching to give voice to the one group of Americans who literally have no voice -- our pre-born babies.

Whether one agrees with the marchers or not, and I strongly agree with them, they should be admired for their selflessness.  But unlike many other causes that come to Washington, the media here will vilify and mock them.

Yet every year since 1973, pro-life marchers have come to Washington.  And this year, there is great joy in their hearts.

This year would have been Roe v. Wade’s 50th anniversary.  Instead of mourning that somber milestone, we are celebrating the good news that Roe is gone and thousands of innocent babies are being saved!

But with the abortion issue now returned to the states, the battle for the sanctity of life is far from over.  We must continue to fight the good fight for the hearts and minds of the American people, and that’s one battle I believe we will win.

Contrary to the fake news media and the current pro-abortion occupant of the Oval Office, the vast majority of Americans do not support abortion on demand.  New polling finds that 69% of Americans support commonsense pro-life restrictions.  For example:

Conservatives must not be afraid of the abortion debate.  When it comes to the sanctity of life, Joe Biden and his Democrat allies in Congress are radically out of step with the American people.  Unfortunately, as we saw just last week, pro-abortion extremism continues to dominate the Democrat Party.

Incredibly, 210 House Democrats voted for infanticide.  They voted against legislation to ensure that babies who survive botched abortions are guaranteed the same medical care that all newborn babies deserve.

And 208 House Democrats opposed a resolution condemning pro-abortion violence against churches and pregnancy resource centers that aid women in need.

Both of these votes – preventing infanticide and condemning violence against churches and pro-life ministries – should have been unanimous!  But in both cases, at least 98% of House Democrats voted for the unthinkable and the inexcusable.

Sadly, these bills are unlikely to even get a vote in Chuck Schumer’s Senate.  But if they did, the results would likely be the same.

Just a few days ago, America celebrated the legacy of Reverend Martin Luther King, Jr., who gave his life fighting the evils of racism and segregation.  There are important lessons for the pro-life movement to be learned from the Civil Rights movement.

First of all, these are both just, moral crusades.  God’s law and the words of our Founding Fathers are clear.  We are all endowed with the unalienable right to life.  We must fulfill that promise.

Second, the Supreme Court got it wrong in Dred Scott, which declared that some people (black citizens) had no rights we were obligated to respect.  The court also got it wrong in Roe v. Wade, when it applied that same flawed logic to another class of citizens (preborn babies).

Lastly, as Dr. King said, “The arc of the moral universe is long, but it bends toward justice.”  The battle for the sanctity of life in America has gone on for 50 years now.  But with the Dobbs decision and the end of Roe v. Wade, we are making progress toward justice for all, including the preborn.