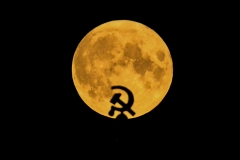 A building's sickle and hammer device stands in front of a full moon. (Photo credit: KIRILL KUDRYAVTSEV/AFP via Getty Images)

In the early 1980s, a Soviet defector earnestly warned an American audience of communist “agitprop” revolutionary techniques. Based on his experience in the KGB, Yuri Bezmenov described the Soviet conspiracy to undermine and conquer the United States and the world. There is no mistaking the diabolical parallels of the assault. Call it “the Communist-Diabolical Complex.”

Although it would be a mistake to attribute too much power to human agents of influence in the struggle between good and evil, the defector has provided a valuable service by unmasking the Devil’s battle plans, designed to discourage and undermine us. The Devil failed in his temptation of Jesus (cf. Mt. 4:9). So assailing members of the Mystical Body of Christ is his only bitter recourse.

Here is an updated version of the subversion process mastered by Soviet intelligence:

It’s no coincidence that the Devil also uses these four stages—demoralization, destabilization, crisis, and normalization—to attack the Church and ruin souls.

During the process of demoralization, the moral fiber and integrity of traditional Church teaching come under assault. God’s revelation as known through the Church over the ages does not matter. What we perceive as good becomes our new reality according to the ancient temptation: “You will be like God, knowing [presuming to control] good and evil.” (Gen. 3:5)

Patterns of practical atheism and the pursuit of pleasure become ingrained in our expectations. Even churchgoers demand that the Church pander to our insatiable appetites. The liturgy becomes a playground of entertainment rather than worship. Preaching the Ten Commandments—too harsh for contemporary ears—gives way to the precepts of therapeutic pop psychology. Better to remain silent than to risk social excommunication by violating the anti-Christian secular creed.

The Devil’s purpose is to replace the sacramental life and parish life with new structures of centralized power, with Church teachings presented as mere policy statements, responsive to the winds of cultural change. Church apparatchiks—even at high levels of the hierarchy—will not tolerate dissent from their own radical departures from traditional teaching and will demand compliance, or at least silence.

A demoralized and destabilized Church may enter the volatile crisis stage. In this final drama, an exhausted populace acquiesces and begins to assimilate the revolution, at peace with heresy and apostasy. But there can be no real peace under the rule of tyranny and injustice.

As with KGB tradecraft, it’s a fair guess the Devil would prefer to disguise his evil sources and methods. Once they are exposed, he would have us believe that the process is inevitable. Satan takes derisive delight in our discouragement. But he is unable to account for (because he cannot understand) the sacramental graces Jesus grants us.

Whenever we renew our baptismal promises, we renounce Satan and all his works and empty promises. With every Mass, we worship Christ, the King, and his triumphant Cross. So with renewed vigor, we hold fast to the firm certainties of faith that guide our lives in Jesus because we have confidence in His promises: “In the world you have tribulation, but be of good cheer, I have overcome the world.” (Jn. 16:33)

We are baptized. We are confirmed. We are members of the Mystical Body of Christ. To borrow a Hollywood cliché: They have no idea who they’re dealing with.

Father Jerry J. Pokorsky is a priest of the Diocese of Arlington. He is pastor of St. Catherine of Siena parish in Great Falls, Va.