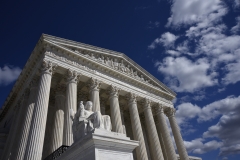 On Tuesday, November 22, Freedom Foundation attorneys appealed to the U.S. Supreme Court a California lawsuit filed on behalf of a state worker whose request to leave her union is being ignored because of an unconstitutional law and an agreement she signed 25 years ago — when public employees could still be forced to support a union as a condition of employment.

The case, Kurk v. Los Rios Classified Employees Association (LRCEA), et al., is the first of four appeals the organization intends to bring to the U.S. Supreme Court this session, with three more to be filed during December.

“The Supreme Court ruled four years ago in Janus v. AFSCME that mandatory union membership, dues and fees in the public sector are a violation of the worker’s First Amendment rights,” said Freedom Foundation Chief Litigation Counsel Eric Stahlfeld. “But the unions have largely ignored the ruling, and lower courts have let it happen.

“Hopefully by appealing several different Janus-related cases, the justices will recognize the need to enforce their earlier ruling,” he explained.

Plaintiff Kristine Kurk works as a benefits technician for the Los Rios Community College. In 1997, she agreed to permit the district to deduct dues from her paycheck on behalf of LRCEA by signing a “dues check-off form” that gave her only two options — full membership and dues of $13 per month or non-membership and a so-called “agency fee,” which also totaled $13 per month.

The form specified no restrictions on terminating union membership or withdrawing authorization to dues deductions.

But when she sought to leave the union in 2018 — only weeks after the Janus ruling was issued —LRCEA officials denied her request, citing her dues check-off form and a 2017 California law preventing public employees from leaving their union while the union’s collective bargaining agreement with the agency they work for is still in force.

In Kurk’s case, there are two problems with that reasoning:

Taken to its logical conclusion, the latter provision would allow a union to keep members in the fold in perpetuity simply by renegotiating their existing CBAs before they expire.

In prior Janus-related appeals, the Freedom Foundation has cited First Amendment protections for free speech because the ruling specifically noted that forcing government employees to fund a union, whose activities are by definition political, amounted to compelled speech.

Kurk is the first case to rely, instead, on freedom of association.

“If a public employer and union, pursuant to state statute, can enter a contract to restrict free association rights by preventing union members from ever resigning membership, then millions of public employees across the country cease to have a meaningful right to freedom of association.”

Kurk and the Freedom Foundation filed suit in 2019 but a district court judge granted the state’s motion for a summary judgment. The 9th Circuit Court of Appeals in August 2022 upheld the lower court’s ruling, asserting that her “continued union membership and the deduction of union membership dues arose from the private membership agreement between the union and Kurk” and that it did not trigger any “constitutional scrutiny” at all.

“A state statute and CBA, not a private agreement between employee and union, compelled Kurk to maintain union membership and pay dues over her objection,” the appeal countered. “First Amendment protections against coerced association are undoubtedly triggered when the state grants its coercive powers to a private union to control union members’ relationship with their union. Denying public employees associational rights under the Constitution simply because they were once union members has no basis in precedent and no foundation in logic.”

Kurk v. Los Rios Classified Employees Association (LRCEA), et al, which Freedom Foundation attorneys appealed in November to the U.S. Supreme Court, is one of four cases the organization hopes the justices will consider during the current session.

In two of the other three — Wright v. SEIU 503 and Zielinski v. SEIU 503 — even the acknowledgment that a pair Oregon public employees’ had their signatures forged on a union membership card wasn’t reason enough to allow them to opt out.

The fourth appeal, Ochoa v. Inslee,  concerns a Spokane, Wash., homecare provider who alleges the state failed to provide procedural due process protections before taking her lawfully earned wages and giving the money to SEIU 775, which represents Medicaid-reimbursed caregivers in Washington.