How the Violence Against Women Act Revoked the Constitution 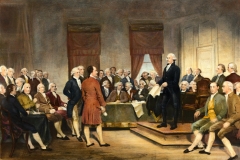 Portrayed is the signing of the American Constitution. (Photo credit: Bettmann/Contributor/Getty Images)

Mention the word “authoritarian” and images come to mind of COVID mask mandates and arrogant school boards laughing off concerns about critical race theory. But authoritarianism in America goes back many years before “two weeks to flatten the curve” became a laughable prelude to arbitrary mask mandates.

In 1994, then-Senator Joe Biden celebrated the passage of his pet bill, known as the “Violence Against Women Act,” a piece of legislation very relevant given that Tuesday is International Women's Day.

How could any person doubt the good intentions of lawmakers who supported a law with such an innocent-sounding name?

Researchers knew full well that men and women were equally likely to engage in domestic violence. But concerns that the VAWA law ignored female-on-male violence were shrugged off. After all, the Fourteenth Amendment guarantees “due process” and “equal protection of the laws,” so no cause for worry. Right?

But it soon became clear that the movement to end domestic violence was being co-opted by a feminist crusade to stereotype men as abusers, weaken the family, and expand the power of the state. History would reveal the Violence Against Women Act to be one of the gravest threats to the Constitution in American history:

A report issued by my organization, the Coalition to End Domestic Violence, estimates that each year, two million persons experience violations of their constitutional rights as a result of VAWA-driven policies. This arguably represents the biggest civil rights roll-back in American history since the Jim Crow era.

For many years, feminists “lied about the facts of DV [domestic violence] in order to tar men as the sole abusers of women and demand radical changes in the law and police practice. Governments, seeing an opportunity to expand their power, readily agreed. Individual women soon came to understand their ability to recruit state power against their male partners. Due process of law went out the window as police were trained that, in any case of alleged DV, it was the male who was at fault.  He could be removed from his home, children, and belongings, and placed under a court order solely on the say-so of his wife/girlfriend. DV restraining orders routinely violated the most obvious constitutional strictures.”

Once the Constitution is jettisoned for the chivalrous cause of protecting women, the proverbial slippery slope becomes a precipitous cliff. The most recent version of the Violence Against Women, S. 3623, introduced in February, shows this to be true.

Imagine that. Simply accuse your spouse of nagging, and you get the house, the kids, and years of child support. No impartial investigations or messy court hearings necessary.

Edward E. Bartlett is the president of the Coalition to End Domestic Violence.