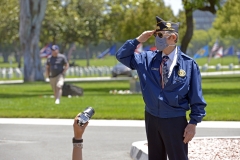 A veteran salutes for a camera at Los Angeles National Cemetery on Memorial Day during the COVID-19 outbreak on May 25, 2020 in Los Angeles, Calif. (Photo credit: Michael Tullberg/Getty Images)

The streets were empty. No one marching. The bands weren’t playing. No music, no 21-gun salutes. Where were the old-timers hobbling along in their military uniforms?

The flags flew at the courthouse and lined the streets, but the sidewalks weren’t filled with jubilant spectators shaking little flags and cheering their heroes. Where were the cars with veterans from World War II, Korea, Vietnam? Where were the younger soldiers in desert camouflage from recent battles in Iraq and Afghanistan?

That was what I saw on Monday — Memorial Day — when I took a ride with my sons to little Mercer, Penn., which every year hosts an annual Memorial Day parade. It’s the kind of parade you see in so many small towns in America: the Elk’s, the Moose Lodge, the Knights of Columbus, the VFW, high-school bands, snow-cone stands, church groups, flags everywhere. I’ve been attending for over 20 years.

And yet, not this year.

For the Mercer Memorial Day Parade 2020, the year of the COVID-19 pandemic, the streets were eerily vacant. The parade was cancelled. And not just in little Mercer, Penn., but in many small towns nationwide.

Take Massachusetts, which has one of the highest per-capita COVID-19 infection rates: Memorial Day in Massachusetts this year was unprecedented and unrecognizable. In fact, at best, it was virtual—truly a virtual reality.

“The state, as well as most cities and towns, will recognize Memorial Day this year in a virtual format to maintain social distancing amid the coronavirus pandemic,” reported The Salem News, “but still allow for the public to honor members of the military who made the ultimate sacrifice.”

A series of events kicked off with “virtual observances” on Friday at the Soldiers’ Homes in Chelsea and Holyoke, followed by a coordinated statewide lighting of public buildings, bridges, and parks on Sunday night, and wrapping up with a “Memorial Day program” that would “air” on Monday.

As for that Memorial Day program, it wasn’t much to celebrate. In towns like Ipswich and Wenham, not unlike the rest of the state, the best they could muster was to “illuminate in gold” (whatever that might look like) various town halls and public buildings — gold to invoke solidarity with Gold Star families throughout Massachusetts. In Danvers, they were a bit more innovative. A rolling caravan of cars took to the streets — i.e., the abandoned parade route — starting at 9:00 a.m. on Monday. This was followed by a “virtual ceremony broadcast” carried on the town’s local community-access cable station at 10 a.m., later posted at YouTube, Facebook, and so on.

The caravan-of-cars concept seems to have been emulated elsewhere. A friend of mine was involved with planning the annual Memorial Day parade in Linglestown, Penn., just outside of Harrisburg. The American Legion settled for a “socially distanced memorial service” in the town square, following which legion members and World War II vets hopped in vehicles and traveled the parade route to a few neighborhoods. My friend regrettably informed me last week that the much-anticipated 100th anniversary of the parade was in jeopardy — a parade that started in 1920 with not only marching World War I vets but Civil War survivors. The head of the local American Legion wasn’t about to surrender a white flag for the centenary.

But for the vast majority of communities, even the how was out of the question. Many simply tossed in the flag. In states where public gatherings of even a few dozen people have been banned since mid-March, the local Memorial Day parade was dead for 2020. It was, at best, virtual.

What a shame. It’s especially a loss because we’re losing so many World War II veterans. We lose more every year, but the decline is notably acute right now due to the nasty coronavirus decimating nursing homes. A tragically disproportionate number of COVID-19 fatalities have been people in their 90s, quite a few of them men who served in World War II.

“We will still be putting the flags up for the Memorial Day weekend,” said the organizers for the Mercer Memorial Day Parade for 2020, grasping for a bit of consolation. Ironically, they offered this instead: “As time comes closer, if we are able to hold a cemetery service, we will do so!”

It was an ironic statement, given that Memorial Day 2020 was effectively dead. But alas, it isn’t buried forever. Memorial Day will rise again, a testimony to those veterans who never gave up.

Dr. Paul Kengor is professor of political science and chief academic fellow of the Institute for Faith and Freedom at Grove City College. His latest book (April 2017) is "A Pope and a President: John Paul II, Ronald Reagan, and the Extraordinary Untold Story of the 20th Century." He is also the author of "11 Principles of a Reagan Conservative." His other books include "The Communist: Frank Marshall Davis," "The Untold Story of Barack Obama’s Mentor" and "Dupes: How America’s Adversaries Have Manipulated Progressives for a Century."