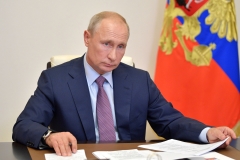 Russia’s attack on Ukraine turns uglier by the day. Moscow’s forces have compounded aggression with attacks on civilians, and apparently personal atrocities as well, conduct which will make an eventual peace settlement, as well as reintegration of Russia into the international system, much more difficult.

Vladimir Putin and his ruling coterie are responsible for the unjustified and illegal invasion of Ukraine. Western policy toward Moscow since the Soviet collapse was foolish, even reckless, but that in no way justified the Russian attack. The Putin regime is responsible, and its crime will prove disastrous for the Russian as well as Ukrainian people.

Yet blame for the tragedy now befalling Ukraine – thousands of dead, millions of refugees, major cities bombarded, economy disrupted, society ravaged – is shared by the U.S. Washington again has demonstrated that its policies matter to the world. Usually in a horrifically negative way.

As has been oft detailed in recent days, the U.S. and European states blithely ignored multiple assurances made to both the Soviet Union and Russia that NATO would not be expanded up to their borders. The allies also demonstrated their willingness to ignore Moscow’s expressed security interests with the coercive dismemberment of Serbia, "color revolutions" in Tbilisi and Kyiv, and especially support for the 2014 street putsch against Ukraine’s elected, Russo-friendly president.

Whether such actions should have bothered Moscow isn’t important. They did, and perceptions are what matter. In this case, perception was reality. Indeed, Washington would never have accepted equivalent behavior by Russia in the Western hemisphere – marching the Warsaw Pact or Collective Security Treaty Organization up to America’s borders, backing a coup in Mexico City or Ontario, and inviting the new government to join the military alliance. The response in Washington would have been explosive hysteria followed by a tsunami of demands and threats. There would have been no sweet talk about the right of other nations to decide their own destinies.

True, this might not be the only factor influencing Putin’s decision on war. He has articulated strong, though distorted, views of Ukrainian nationhood and Kyiv’s proper relations to Russia. However, security concerns have always loomed largest. He and other officials criticized NATO expansion early, when the alliance began its move eastward. Most famously, he raised the issue in his talk to the 2007 Munich Security Conference. His position reflected Russia’s perspective but was serious both in substance and delivery.

Putin said the U.S. had "overstepped its national borders in every way," that its "almost uncontained hyper use of force" was "plunging the world into an abyss of permanent conflicts." This was after America’s endless war in Afghanistan and disastrous invasion of Iraq; Libya, Syria, and Yemen were yet to come. He also observed that "NATO has put its frontline forces on our borders, and we…do not react to these actions at all."

"I think it is obvious that NATO expansion does not have any relation with the modernization of the alliance itself or with ensuring security in Europe. On the contrary, it represents a serious provocation that reduces the level of mutual trust. And we have the right to ask: against whom is this expansion intended? And what happened to the assurances our western partners made after the dissolution of the Warsaw Pact? Where are those declarations today? No one even remembers them. But I will allow myself to remind this audience what was said. I would like to quote the speech of NATO General Secretary Mr. Woerner in Brussels on 17 May 1990. He said at the time that: ‘the fact that we are ready not to place a NATO army outside of German territory gives the Soviet Union a firm security guarantee.’ Where are these guarantees?"

If allied behavior was not a sufficient cause for Moscow’s invasion, it certainly was a necessary cause. Putin might believe Ukraine should be part of Russia, but for the last 22 years did not attempt to conquer the country. His more limited attacks in 2014 were triggered by the Western-backed ouster of a friendly government. Whatever Putin’s view of reconstituting the Soviet Union, after two decades all he has managed to do is retake Crimea and extend Russian influence over the Donbass, Abkhazia, and South Ossetia. A repeat of Adolf Hitler he certainly is not.

Again, this does not excuse Moscow’s latest conduct, which is grotesque, criminal, and immoral. However, it offers a terrible reminder that U.S. intervention has consequences.

Consider Iran. Tehran is a repressive dictatorship and plays a malign role in the region. Fear of Iran now consumes much of the U.S. foreign policy community, which seems to imagine Tehran as an intimidating superpower and America as a threatened middling power. Response to Iran now dramatically distorts Washington’s Mideast policy. Most tragically, Washington has made Tehran the excuse for backing the mass murder of Yemeni civilians by Saudi Arabia and the United Arab Emirates.

However, Iran did not come by its malicious role naturally. Washington famously promoted the 1953 coup that ousted the elected government of Mohammad Mosaddegh and for a quarter century supported Iran’s shah, who created a brutal police state which was justifiably overthrown by his own people. Tragically, the new regime proved equally tyrannical, while also determined to spread Islamic revolution.

The war in Yemen has consumed almost 400,000 civilian lives. Internal strife always has been common in that relatively new nation, but Saudi and Emirati intervention in what was just another internal fight expanded and intensified the conflict. Although they could continue the war without U.S. consent, they could not do so effectively without U.S. support. American companies not only provided the planes but service them today. The U.S. also provides munitions and intelligence, and in the war’s early days refueled Saudi and Emirati planes as well. This backing has been vital for the operation of the royal air forces and has contributed to many thousand Yemeni deaths.

Nor is America a favored target of terrorism because of random selection or its virtuous reputation. Washington has routinely interfered in the affairs of other nations – backing dictatorships, supporting oppressive occupations, meddling in elections, and intervening militarily. A vivid example was Lebanon in 1983, in which the U.S. joined the latter’s bitter civil war. An American highlight over the last two decades has been droning, bombing, invading, and occupying other lands.

Michael Scheuer, onetime CIA counter-terrorism analyst, cited aid to authoritarian Arab governments, support for Israeli occupation over Palestinians, Washington’s long economic and military campaign against Iraq, and U.S. military units based in Saudi Arabia as grievances. Osama bin Laden said after 9/11: "it entered my mind that we should punish the oppressor in kind – and that we should destroy the towers in America in order that they taste some of what we tasted, and so that they be deterred from killing our women and children."

The would-be Times Square bomber, Faisal Shahzad, thought similarly. His sentencing judge asked Shahzad about his reasoning, reported ABC News: "Shahzad said the judge needed to understand his role. ‘I consider myself to be a Muslim soldier,’ he said. When [Judge Miriam] Cedarbaum asked whether he considered the people in Times Square to be innocent, he said they had elected the U.S. government. ‘Even children?’ said Cedarbaum. ‘When the drones [in Pakistan] hit, they don’t see children,’ answered Shahzad. He then said, ‘I am part of the answer to the US killing the Muslim people’."

Bad, even criminally aggressive, U.S. policies don’t justify attacks on civilians, but they help explain terrorism. For peoples and states without missiles, air wings, and carrier groups, terrorism is the most effective and perhaps only method of responding. That is, terrorism is war by other means, which is why it also has been waged in Sri Lanka (by separatist Tamils against the Sinhalese-dominated government), Israel (over its maltreatment of Palestinians), Spain (by Basque separatists), and many other nations, including the old empires of Russia and Austro-Hungary. In the latter an assassination by a Serbian terrorist triggered World War I.

Perhaps the most pernicious U.S. intervention was entering that conflict. Washington had no stake in the imperial slugfest and Woodrow Wilson’s formal justification for intervening, to defend the right of Americans to book passage on a belligerent power’s reserve cruisers carrying munitions through a war zone, was eloquent nonsense. Alas, America’s entry allowed the imposition of the infamous Versailles Treaty Diktat, which became one of the grievances that aided Adolf Hitler’s rise to power. Whatever the details of the compromise peace that otherwise likely would have resulted, it could hardly have yielded a worse result than World War II.

Now the Russo-Ukraine war adds another example to Uncle Sam’s history of foreign policy malpractice. The conflict is not strictly America’s fault, since Moscow made an independent decision to attack its neighbor. For that, the Putin government bears responsibility.

However, the U.S. and its European allies set the stage for the war, engaging in behavior that clearly yet needlessly antagonized Russia. For contributing to the horror now engulfing Ukraine, Washington should be held responsible and its officials held accountable. Otherwise more people will keep dying because of Uncle Sam’s foolish hubris.