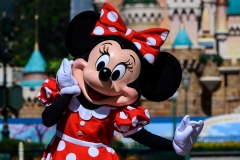 Women are being erased by the very people and companies that claim to support women’s rights. Disney has changed Minnie Mouse’s outfit from a red polka dot dress and heels to a blue pantsuit with flats and M&Ms has de-feminized its green and brown commercial characters. Those are just the tip of the iceberg of how our culture is erasing women today.

Minnie Mouse is ditching the iconic red polka dot dress in favor of a pantsuit designed by Stella McCartney. The new look debuts at Disneyland Paris.

What do you think about the change/do you care? pic.twitter.com/UIOcYdHOzW

It may seem silly when cartoons and candy characters in advertisements cannot be represented as distinctly feminine, but real life is worse. Women are not allowed fair sports competition, are not allowed to complain when a man walks into their locker room, are pressured or coerced into aborting their daughters, and are vilified if they dare to use or define the word “woman.”

For generations before us, women have been fighting for the right to be seen, to vote, to play, to equal pay, to be a voice, to preach from the pulpit. And now, all in the name of being “evolved” or “woke” or “relevant,” women are being erased and our uniqueness slowly diminished.

From the beginning of time, the very creation of women has been under attack because the enemy of our souls hates us. He was jealous of Eve for she was uniquely made and beautiful. Women were sought out from the beginning to be destroyed because Eve meant life for humanity instead of death (Genesis 3:20). It was not a coincidence that the serpent chose the woman to tempt first. Yet God created women on purpose. In scripture, with all the men ignoring or belittling the women, Jesus made a place for them, comforted them, and healed them (Mark 5). Women were created with great intentionality. Women were given the ability to pray, empathize, instruct, and use their voices — the first people Jesus appeared to as the Risen King were women (Luke 24). Even on our most molecular level, women are uniquely designed and made in the image of God.

I am passionate about women and their unique purpose and not just because I am one. As a master’s level pastoral counselor and certified coach, I counsel women who are facing pornography addiction as I run an online recovery ministry uniquely tailored to the female addict. It is not the career I dreamt of growing up as a little girl, but when I was just ten years old, I was exposed to pornography. That exposure led to nearly a ten-year addiction of my own. For years while I was struggling in silence as a teenager, I believed I was the only woman who watched pornography. Literally everything in my culture and church told me that pornography addiction or simply watching pornography was a uniquely male problem. I struggled with the idea that there was something wrong with me as a woman who watched pornography. I often questioned my femininity. I certainly questioned my faith and my beliefs about my own sexuality.

I offer this pornography addiction example as another way to show how women are pushed aside in favor of men’s needs or cultural beliefs and standards. For years, there were no resources for women who struggled with hypersexuality or sexual addiction because no one believed women could possibly have such an issue. We can and we do and thankfully, women can get the help they need now. I could also go on to mention the atrocities that are happening to women and young girls around the world through the pornography industry and commercial sex trade, including in the United States. Many claim pornography and the commercial sex trade is progressive and empowering to women, but what is happening could not be further from it. I encourage you to look into amazing organizations like Exodus Cry and the National Center on Sexual Exploitation to learn about these issues in greater depth.

I do not wear makeup most days, I never wear dresses, I prefer my hair in a messy bun, and I have not worn heels since high school show choir. I cannot relate to the Green M&M with her heels and long lashes. Those things do not make me female - God did. I am proud to be a woman and as a woman, I want to see other women achieve their dreams, have careers, become mothers. As a counselor, I want to see other women heal, thrive, and fulfill their purpose. While she does not have to do it all in heels and pearls, we must let women be women and empower them in whatever position they are in. If we let men, companies, and supposed women’s rights groups lead this cultural charge to tear away everything that makes us unique as women, soon we will have nothing left to call our own. We must stop allowing ourselves to be erased and instead write out our own futures in pen.

Crystal Renaud Day is the founder of SheRecovery.com, a community devoted to helping women recover from pornography and sexual addiction.