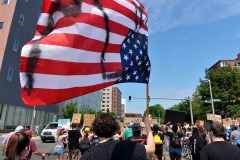 The United States is not a democracy. It is a republic.

The Pledge of Allegiance, learned by every American child, includes the very words “to the Republic.” The Founding Fathers knew the most efficient government, after breaking with the British Empire was not to be a direct democracy, but a republic. The word is of Latin origin, res publica or “the public affair.” It gives the impression that the public, and not the aristocracy, the royalty, or the elites, have a say in politics, most commonly through representation.

The problem is – republics are notoriously fickle. When asked, after the Constitutional Convention of 1787 if the United States was a monarchy or a republic, Benjamin Franklin quipped, “A Republic, if you can keep it.” Franklin was, among other things, a historian with full knowledge of other, long-dead historical republics.

Some republics last centuries without crashing; others last merely years, but all, eventually, fall. The United States is nearing the end of its second century, the oldest uninterrupted country with a Constitution in the world, surpassing numerous ancient and medieval states that have long since collapsed.

It is inevitable we will fall, but how?

Some examples of the past may very well help us explain the foreseeable downfall of the United States, or help us delay it, if only temporarily. Others can demonstrate that even if the republic, as we know it falls, it doesn’t mean that something new or comparable can’t rise to take its place.

Ancient Rome, for example, had a long history as a Republic before becoming an Empire. Around 509 BC, the legendary King of Rome, Lucius Tarquinius Superbus, was overthrown and the monarchy abolished. In this new Rome, two Praetores (“leaders,” or Consuls) were to be elected by the people each year. They were to check and to balance each other, along with the Senate which was made up of the aristocracy and, later, the plebian lower-class, advising.

The Roman Republic was sound for centuries, until 82 BC, when the Senate appointed Lucius Cornelius Sulla as dictator (a much more legal and neutral position than what we may think today). He effectively made the Senate superior in both the number of members and in the power it held over the lower-class Plebian Council.

Within two generations, Julius Caesar made his famous march across the Rubicon amid political and military disarray in Rome. He declared himself dictator for life, when normally a dictator was to resign after six months. He also increased the number of Senators to 900, dwarfing the plebeians. Governors received term limits, and finally, Caesar had the power to personally appoint any magistrate.

His rule secure, Caesar was a threat to the Republic’s foundation, which led to his undoing. “Beware the Ides of March.” Upon his assassination in 44 BC, the Republic plunged into chaos and bitterness. Enter Gaius Octavian, adopted son of Caesar, a military veteran and general who defeated giants like Antony and Cleopatra of Egypt and Lepidus.

The Senate, looking to Octavian as a strong leader, gave him the title Augustus Caesar, and the position of Princeps (First Citizen) for life, with the duties of being the military commander and leader of the consuls. They effectively gave away the Republic their ancestors had built for five centuries. This was 27 BC, the first year of the Roman Empire.

The motif of a strong leader restoring order is not a one-off event in history. Most notorious, perhaps, is the Weimer Republic in the 1930s, which gave away whatever freedom it had to a psychotic, genocidal firebrand politician named Adolf Hitler. Though the Weimer Republic was still officially known as the Deutsches Reich (the German Reich), it had abolished its monarchy in 1919 and was headed by one incompetent coalition after another. Post-war hyperinflation was so bad that the Reichmark was more valuable as playthings for children than currency. One famous photo shows a German carrying a literal wheelbarrow full of currency just to buy bread.

This Republic’s fall began in 1930, when the National Socialist German Workers’ Party, the Nazis, won 107 seats in the Reichstag parliament. By comparison, two years earlier, the NSDAP won only twelve. The 1930 election had no majority among the Nazis, the Social Democratic Party, and the Communist Party, and no coalition was formed. Chaos in an already chaotic country ensued.

President Paul von Hindenburg evoked Article 48 of the Constitution, which allowed him to effectively rule, temporarily, with unlimited power, and suspended several articles of the Constitution. Things came to a head when Hindenburg appointed Hitler as chancellor on January 30, 1933, with several other Nazi Party members designated key cabinet officials.

A month later, the Reichstag fire occurred, completely torching the parliament and giving Hitler the perfect scapegoat, the Communist Party. The fact that they conveniently caught a communist was just icing on the cake. This allowed the next election, in March of 1933, to be overwhelmingly in support of the NSDAP.

Because of the Reichstag fire, Hitler proposed the Enabling Act, which was, effectively, a permanent Act to Article 48 of the Constitution. Hitler and his cabinet could pass any law without the approval of the Reichstag, which required a 2/3 vote. The Social Democratic Party planned to veto the law, which would have put it under the required number. However, Herman Goering, then the President of the Reichstag, introduced an amendment that no vote should count for those Reichstag members who were absent. It just so happened that 26 Social Democrats were not present, as they were in hiding. Likewise, there were no Communists. Therefore, of 584 Reichstag members, this new rule required only 378 ayes to pass. Before Goering’s amendment, it would have required 432.

So, with maneuvering, threats, and false promises, the Nazi Party formed a coalition with the centrist Center Party, and the Enabling Act was passed, thus beginning the twelve-year Nazi reign. Every Social Democrat vetoed the Act, and leader Otto Wells declared that “we German Social Democrats pledge ourselves solemnly in this historic hour to the principles of humanity and justice, of freedom and socialism. No enabling act can give you power to destroy ideas which are eternal and indestructible."

The Enabling Act was legally passed 441 to 91, without a coup, manipulation, or assassination. It was all in accordance with Germany's constitution.

But just because a republic falls, that does not mean it’s gone forever. There are many more examples of fallen republics in history, and all boil down to the fact that republics are unstable against a centralized, autocratic, and charismatic government. Nonetheless, a fallen Republic doesn’t mean something new and similar can’t take its place.

The Commonwealth of England from 1649 to 1660 was short-lived but the only republican period of English history. It fell after a short 11 years because of its strict Puritan and Calvinistic views; no Christmas, no theater, and strict Sunday observance. These did not go over well with the populace. Generals revolted and people supported the restoration of the monarchy, and on May 8, 1660, King Charles II, son of deposed King Charles I, was crowned lawful king.

The French are currently on their fifth republic, legally. The first formed in 1792 after the French Revolution and fell on Dec. 2, 1804 when Napoleon Bonaparte was voted emperor. The French Second Republic was similarly short lived, and similarly resulted in the re-appointment of a monarchy in 1852. The Third Republic fell in 1940 with the invasion of Nazi Germany, and the Fourth, post-war republic dissolved itself in 1958 during a colonial crisis. The Greeks are similarly on their third republic, with the first falling in 1832 and the second in 1935.

Within the next century, the United States of America may very well no longer exist under its current form. It may be that Americans will eventually desire something different. Maybe they will want something more streamlined, or perhaps a more parliamentarian system of government like our British cousins. Hopefully, any such transitions will come peacefully. But as with every generation, the people of America may rise up – whether in the voting booth or in arms – to reestablish true American freedom that is indispensable and unalienable. That, I believe, will never change in our national spirit.

But republics historically always fail. The German politician Otto Von Bismarck is rumored to have once said, “God looks out for fools, drunks, and the United States of America.” Is America special enough?

America after all…is a republic.