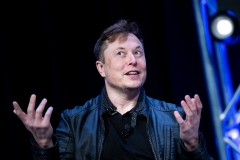 In his fight to reopen the economy, President Donald Trump recently assembled the Great American Economic Revival Industry Group, a committee comprised of “esteemed executives, economists, scholars, and industry leaders” to guide the country out of the coronavirus quarantine safely.

The president’s commitment to ensuring the health and wealth of America is laudable, as are most of his administration’s core objectives. However, for all of the success he has had politically, one of his only flaws – allowing a non-loyal opportunist onto the White House team – may come to haunt him yet again in this new endeavor.

For reasons that are unclear, the president named Tesla CEO and repeated Trump backstabber Elon Musk to the new White House committee. You may remember Musk from his short-lived stint on two of the president's advisory councils back in 2017, where he chose publicly to throw a fit and leave the council by way of a tweet.

America’s decision to pull out of the Paris Climate Accord triggered Musk's resignation, perhaps fueled by self-interest.

Tesla's subsidiary, SolarCity, experienced a 12 percent stock boost after former President Barack Obama entered the U.S. into the agreement, which safeguarded the solar residential market, of which SolarCity owns a large share. Moreover, the fact that Musk left the council because the president fulfilled a campaign promise should tell you all you need to know about his loyalty to Trump, who rightfully called out departures from his councils made by Musk and other CEOs for what they were, political grandstanding.

It shouldn't have come as a surprise that Musk resigned; he has criticized Trump at every turn.

Musk not only supported Hillary Clinton; he trashed the president’s character while calling Trump’s supporters extremists that would probably start a war.

As if his statements weren't enough, he's also flat-out defied government orders and broke the law, at times putting his employees at risk.

Back in August 2019, as the president was fighting to protect American companies against unfair Chinese business practices, Musk defied a government request to stay out of China by flying there and schmoozing with officials. When the president decided to execute a temporary travel restriction on countries that had long been criticized for unsatisfactory security standards, Musk, who was at that time still on the president's 2017 councils, jumped on the liberal bandwagon and openly criticized Trump. At a time of urgency, when unity is critical, the president couldn’t count on Musk to support him.

Musk has found countless ways to go against the administration.

With the recent coronavirus, President Trump has worked tirelessly to keep America safe. He's offered a series of rules designed to stop its spread, but Musk decided he knew better. During the apex of the outbreak in California, Musk kept his factories open. Later, it was relieved that multiple employees had the virus, at least one of whom was on-site when they began feeling ill. This came amid an outright rejection of government guidelines for businesses and was another example of Musk’s reckless behavior.

Ultimately, Musk doesn't care about the goals of the president, or the country. He's entirely focused on his business and his bottom line. While President Trump is bringing back factory jobs, Tesla is shipping jobs to Europe. While Trump was working to protect companies like Tesla from Chinese aggression, Musk was busy cuddling up to the country’s communist leadership.

As the country looks to rebound from one of the greatest crises of the century, the president needs to ask himself, "Is this someone America wants to hang around the White House again?" I think the answer is more evident than ever.

Chuck Muth is president of Citizen Outreach and a longtime political activist in Nevada. He is the state’s #1 conservative blogger, an author, a columnist and veteran campaign trainer for organizations such as the Leadership Institute, the Republican National Committee, Campaigns & Elections Magazine and GOPAC.