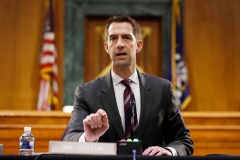 The bill is concise, and desperately needed. As I have warned since last year, critical race theory (CRT) and related ideologies have begun to make their way into the armed services, with some branches promoting “white fragility” book clubs and the West Point military academy teaching CRT as part of a leadership program.

The premise of Sen. Cotton’s legislation is that the military should encourage its members to “love the United States,” defend the “founding principles of the United States,” and maintain policies that treat people as “human beings with equal dignity and protection under the law.” Critical race theory, according to the findings in the bill, undermines these three goals by presenting the United States as a racist, oppressive nation and by encouraging racial division under the guise of “social justice.”

Cotton’s legislation would put an end to this. (Disclosure: I reviewed and provided feedback on an initial draft of this legislation.) The bill would prohibit the armed forces from directly promoting the core tenets of critical race theory: that “the United States of America is a fundamentally racist Nation;” that “an individual, by virtue of his or her race, is inherently racist or oppressive;” and that “an individual, because of his or her race, bears responsibility for the actions committed by other members of his or her race.” The bill also includes a provision against segregating members of the armed forces by race, which has become common practice in many CRT training programs.

This should be uncontroversial. America’s public institutions, especially the military, should not promote the principles of race essentialism, collective guilt, and racial segregation, which are anathema to American ideals. That this legislation is even necessary is a sign of how pervasive these ideas have become, even in ostensibly apolitical environments like the military.

These are not idle questions. Reports in recent months suggest that the military is rapidly becoming politicized. Top generals have declared their allegiance to groups and concepts steeped in the ideology of critical race theory. The Pentagon and high-ranking officers launched a coordinated attack against Tucker Carlson, a cable talk show host who had dared to criticize them. And the National Guard expressed its displeasure with a sitting member of Congress by sending a detachment of soldiers in full uniform to her office on Capitol Hill.

Though the text of Cotton’s bill raises direct questions about critical race theory, its subtext asks a series of deeper questions: what is the purpose of the armed forces—to promote fashionable academic trends, or to defend the nation? If we are unwilling to prevent the armed forces from promoting the idea that America is a racist oppressor-state, then what are we defending in the first place? Sen. Cotton should pose these questions to his colleagues as often as possible until he gets an answer.

Christopher F. Rufo is a contributing editor at City Journal and the director of the Center on Wealth & Poverty at the Discovery Institute.

Editor's Note: This piece originally appeared on The City Journal.