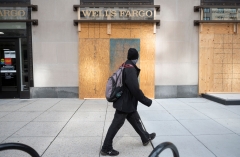 A man walks past a boarded up Wells Fargo bank, three days before the 2020 presidential election, as business prepare for any riots in Washington, D.C. (Photo credit: ANDREW CABALLERO-REYNOLDS/AFP via Getty Images)

Business owners boarded up their stores, fearing that the election might unleash another wave of destructive rioting. In Washington, D.C., luxury shops and office complexes constructed fortifications with boards, chains, fences, and barriers. In the neighborhood surrounding the White House, the Secret Service, laborers, and left-wing protesters all prepared for Election Night.

Then something miraculous happened. The following morning, as the election returns began to favor former Vice President Joe Biden, the fences, boards, and chains came down. Small business owners reopened their shops, and the anticipation of violence evaporated. The national media, which had been stoking fears about Proud Boys and white supremacists flooding the cities with political violence, simply dropped the story—as if it had never been a story.

The rest of us shouldn’t move on so easily. Riot preparations are unprecedented in modern American electoral history. The media have quickly moved to establish a new narrative—the “return to normalcy” under a presumptive Biden presidency—and would prefer to relegate the much-discussed pre-election tensions to the memory hole.

The threat of election violence should be understood in the context of the months-long rioting that began with the death of George Floyd in Minneapolis. Despite a handful of incidents involving right-wing agitators, most urban unrest has been driven by the activist left, loosely organized under the banners of Antifa and Black Lives Matter. This reality has been exhaustively documented in newspaper reporting, activist livestreams, and police-blotter mugshots.

While the national media can afford to peddle a largely imaginary narrative about “white supremacist violence,” business owners in New York, Minneapolis, and Portland have no illusions about where the real threats come from: they’ve spent the past five months defending themselves against vandalism, looting, and robbery from black-bloc rioters and criminal opportunists. Across the country, many downtown stores put up signs declaring their allegiance to Black Lives Matter, implicitly saying: “we’re on your team; please don’t burn us down.”

In political terms, the activist left’s campaign of violent protest provided a convenient foil for the Biden campaign. Biden adopted the high-minded language of racial justice, promising to combat “systemic racism” while benefiting from the implicit threat of violence from far-left shock troops on the ground. It’s the same logic of extortion that any thug would use—vote for us and things will return to normal; vote for Trump and your cities will burn.

Ultimately, the post-election sequence of events gives the lie to the media narrative and Biden’s inside-outside gambit with Black Lives Matter protesters. Immediately after the networks began calling states for Biden, left-wing protesters demobilized, the white supremacist threat failed to materialize, and small businesses took down the plywood. You could even say that the extortion worked: voters delivered the election to Biden, and the rioters delivered the return to normalcy they had promised.

It’s impossible to know exactly how this dynamic may have influenced the electoral math. But it undoubtedly had a profound effect on the behavior of urban business owners and contributed to a widespread sense of foreboding and anxiety for American voters in every jurisdiction. Even in my own small town in Washington State, as the election approached, the men in the neighborhood talked about home defense and preparing for potential unrest. Without a doubt, the fear of post-election violence was a background variable—and pressure point—for this entire election season.

Regardless of one’s preference for Biden or Trump, this dynamic sets a dangerous precedent. Left-wing activists in cities like Portland have rioted on a nightly basis for more than five months. They operate with impunity: they know that there will be few arrests, few prosecutions, and few consequences; most will be bailed out and back on the streets in a matter of hours. Biden’s apparent victory has delivered a reprieve from this kind of violence, but not from similar threats in the future.

For what many take away from the election’s outcome is that the threat of violence is now a viable, even proven, political tactic in America.

Christopher F. Rufo is a contributing editor at City Journal and the director of the Center on Wealth & Poverty at the Discovery Institute.