How is Oil Priced? 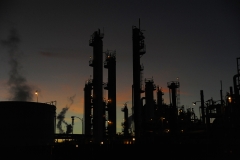 In days of old, when knights were bold, and oil exchanges were not invented, prices were steady, supply was plenty, and Big Oil kept drivers contented.

Before the first Energy Crisis started in 1970, the oil industry was run by major integrated oil companies. They explored for, developed, and produced oil fields, refined the oil, and sold their products through their own outlets to consumers.  The most obvious sales point was gas stations. They priced their products competitively with each other.

All other prices were backed up from the retail prices. All the exploration, drilling, production, refining, and transportation had to be within a cost structure within the retail price. Posted oil prices were used for buying oil from independent producers, accounting for transfers between subsidiaries of integrated companies, and for intercompany transactions to balance market demand with supplies in various parts of the U.S. and the world.

The producer-country governments took control of operations from oil companies to kick off the 1970s energy crisis.  They demanded much higher prices than the oil companies had paid so they took over selling their own oil.  They had no market system, however; they did not know who or where the buyers were at any given hour.

On the other hand, the industrialized economies and developing countries alike suddenly had to buy their own supplies.  But there was no longer a managed supply system, no central market.  Buyers did not know where the oil supplies were, who had them, or what the price was.  Buyers and sellers did not know how to access each other or deal as the entire system disintegrated into a dynamic, fast-moving, dispersed spot market.  Turmoil, chaos, and confusion followed.  No one was in control. Consuming countries panicked.

Enter the oil traders.  Previously operating on the fringes of the industry, oil traders suddenly became the main intermediaries because they knew who might be selling and who might be buying at any given moment and they could deal quickly because they knew each other’s voice on the phone. To say these were colorful people is an understatement.  The biggest Rolodex belonged to a former Phibro trader, Marc Rich, who became the King of the Spot Market because he was the biggest and most notorious player who put together buyers and sellers in deals no one else could or would.

With high and increasing oil prices worldwide and price controls at home, small and midsize American oil companies shut in wells in the U.S. and swarmed the world with geological, engineering, operational, and management expertise to find and develop new fields elsewhere.  An overcapacity of more than 30% was developed by the early 1980s.

And then, at the 1982 Oil and Money Conference in London, a lady announced she was about to take control of the oil price by starting public trading of fixed-period contracts for 1000 barrels of West Texas Intermediate (WTI) oil in tanks in Cushing, Oklahoma.  Her name was Rosemary McFadden and she was head of operations for NYMEX.  The initial reaction was one of surprised skepticism.  Who?  What?  What will that do?  NYMEX?  Don't they trade chickens and eggs?  She's going to get into the oil market and establish prices with open trading?

She did.  On March 30, 1983, oil contracts started trading on the NYMEX, they still do, and the WTI oil price is the price quoted by media in the U.S. and widely elsewhere.  Open trading and prices profoundly changed the oil markets to this day.

It took a while for the effects of trading on an open exchange to become recognized and accepted.  Exchange trading gradually revealed price weakness and supply overcapacity.  In early 1986 the oil price crashed, falling about 65% in a few days and stayed low for 20 years.

With a U.S. export ban in place, the IPE in London started trading contracts for 1000 barrels of Brent crude in June 1988, and the Brent quoted price became the most recognized and widely used worldwide and in parts of the U.S.

Trading contracts for crude on open exchanges created a new market: The Paper Market of traders who only trade contracts and who never expect to take possession of any oil.  They are highly sensitive to perceived changes of supply or demand. If they believe the market has surplus supply, they will sell prices down and, conversely, if they believe in a market shortage they will bid prices up.

Because they trade contracts for future physical delivery with open bidding and not specific barrels of oil the price of the last trade is the price of any barrel and immediately affects the price of all oil. Prices are therefore leveraged worldwide to large swings based on small perceived changes of supply or demand.  Specific cause effects are difficult to isolate but I will go out on a limb and estimate a 1-1/2% to 2% change of supply or demand will cause around a $12+/- change of price.

Because contracts can be traded many times a day, trading volume is two to five times larger than the world production rate.

In effect, we have two markets: The Paper Market and the Physical Market of oil in tanks at various recognized storage locations at ports, pipeline terminals, or in tankers at sea. The two markets interact and influence each other in several ways.  Producers can use exchange contracts to hedge physical sales prices for their production. Physical purchase and sales contract prices are keyed to an exchange-quoted price with adjustment for crude oil characteristics and location. The owners of Brent or WTI contracts at maturity become owners of the oil so Paper Market traders will unwind the contract position before maturity to physical buyers.

This price sensitivity drove surplus contingency supply capacity from the system; supply and demand are generally in close balance.  This lack of resilience exacerbates the current energy crisis.  In addition, the Biden administration is depleting the U.S. Strategic Petroleum Reserve increasing American vulnerability. OPEC and OPEC+, directed by Saudi Arabia and Russia, can manipulate the market by leveraging small percentage changes of production rates. The consuming countries are thus now victims of changes to control of the supply system they allowed in the early 1970s and pricing system changes in the 1980s.  Big Oil is not the problem.