What Pope Said to Biden Is Unconfirmed 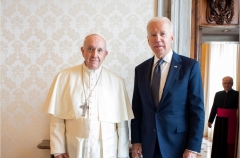 After Pope Francis and President Joe Biden met Friday, President Biden said that the pope called him a "good Catholic" and that he should "keep receiving communion." The Vatican has not confirmed the veracity of Biden's account.

Like everyone else, we at the Catholic League have no way of knowing whether Biden's remarks are accurate. But from what we know about the Vatican's handling of the meeting and Biden's long record of lying about many important matters, we are maintaining a healthy skepticism about the president's rendition.

It is certainly in Biden's interest to have everyone think that the pope encouraged him to keep receiving communion. This issue matters because it has troubled many American bishops; they will meet in a few weeks to discuss it. Biden's lust for abortion rights, for instance, is cause for grave concern.

One reason why we are skeptical of Biden's account is that it seems to be at odds with the Vatican's decision to deny media press coverage of the meeting. The White House was banking on a photo-op, knowing that the optics would serve the president's interests. But they were stiffed the day before the meeting.

If it is reasonable to conclude that the Vatican did not want the appearance of being played by the White House — sending the message that this pro-abortion Catholic president is a model Catholic — then it appears contradictory to laud his Catholic credentials. More important, why would the pope inject himself into the controversy between U.S. bishops and the president, knowing that by doing so he would undercut the United States Conference of Catholic Bishops (USCCB)?

Then there is the issue of lying. That Biden is a pathological liar cannot be denied. Here are a few instances.

The first example looks like small potatoes, but when coupled with the other examples, it takes on significance.

In 1974, when Biden was a freshman senator from Delaware, he bragged how he hit a ball 358 feet at his second congressional baseball game on July 2. In fact, he went 0-for-2.

The year 1987 was not a good one for the presidential hopeful. David Greenberg, writing in Slate, a left-wing media outlet, recalled how Biden plagiarized a speech given by British Labor Party leader Neil Kinnock.

"Biden lifted Kinnock's precise turns of phrase and his sequences of ideas — a degree of plagiarism that would disqualify any student for failure, if not expulsion from school. But the even greater sin was to borrow biographical facts from Kinnock that, although true about Kinnock, didn't apply to Biden. Unlike Kinnock, Biden wasn't the first person in his family history to attend college, as he asserted; nor were his ancestors coal miners, as he claimed when he used Kinnock's words."

This was just the beginning of Biden's lies. It was then revealed that he plagiarized from speeches given by Robert Kennedy, John F. Kennedy, and Hubert Humphrey. The next day, he admitted to telling more lies. He confessed to receiving an "F" in a law school course because he plagiarized five pages from an already published article.

Shaun King is an African American writer who has tracked Biden's civil rights record. Here is what he wrote in 2020 about this issue:

"On two very important occasions, Joe Biden actually told the entire truth about his involvement in the Civil Rights Movement. Nearly everything else has been a lie. I've counted at least 31 different lies he has told about being an activist, organizer, sit-in demonstrator, boycott leader, voter registration volunteer, black church trainee, and more in the Civil Rights Movement, but every time I dig, I actually find more interviews, more lies, more fabrications, more tales he told to voters, reporters, historians, and more (his emphasis)."

When an anti-Semite attacked the Tree of Life Synagogue in Pittsburgh in 2018, leaving 12 dead, Biden claimed he later visited the synagogue, saying he spoke to the people there. He lied. He was never there, as officials at the synagogue recounted.

In his first 100 days in office, the Washington Post listed 78 false or misleading statements he made.

Recently, several high ranking military officials said that Biden's rendition of the advice they gave him on withdrawing from Afghanistan was patently untrue.

It is for these reasons that we are skeptical of Biden's account of what the pope said to him at their meeting.