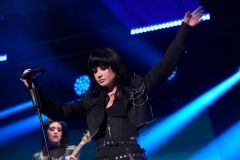 Demi Lovato’s on-again, off-again, relationship with God blew up when authorities in the United Kingdom banned a poster for one of her albums on the grounds that it was anti-Christian. This is remarkable given the fact that Christians are now a minority in this thoroughly secular nation.

In August 2022, Lovato released her eighth album, “Holy Fvck,” but only now did she accompany it in the U.K. with a poster depicting her as Christ crucified wearing bondage attire.

The nation’s advertising watchdog organization, The Advertising Standards Authority, issued a statement about the poster saying, the “image of Ms Lovato bound up in a bondage-style outfit whilst lying on a mattress shaped like a crucifix” crossed the line. The singer was “in a position with her legs bound to one side which was reminiscent of Christ on the cross.” This, along with the title of the album, meant the poster was “likely to be viewed as linking sexuality to the sacred symbol of the crucifix and the crucifixion.”

Songs on the album are replete with Christian bashing and lyrics boasting of Lovato’s sinfulness. For example, on the title track she mocks Holy Communion, “Cause my body’s the communion/Take a bite of what I’m doing.”

Lovato does not know who she is. She has been in drug rehab and has suffered from alcohol abuse and eating disorders. After she came out as “gender fluid” in 2018 and “nonbinary” a year later, she found the time to get baptized in the Jordan River.

“I never felt such a sense of spirituality or connection to God…something I’ve been missing for a few years now,” she said at the time. “Spirituality is so important to me…to be baptized in the Jordan river—the same place Jesus was baptized—I’ve never felt more renewed in my life.”

Lovato grew up in a Baptist home in Dallas, Texas. She told Jane Fonda in 2021 about her angst. “There’s been moments in my life that have been very confusing to me, you know, being 10 years old attracted to women and not knowing what that meant as a Christian, and being raised in the South.”

She’s been through it all, including cutting herself. At the time of the Fonda interview, she tweeted, “Sometimes it seems like God just keeps throwing crap my way and I get SO angry with him.” She got really personal. “I know you’re there God. But umm… Really dude?”

She also told her Twitter fans, “Please say a prayer for all those struggling with eating disorders, self-harm, mood disorders, and substance abuse.” She checked a lot of boxes with that one.

Lovato’s latest album suggests that she is turning away from God again. But we can’t be sure given her perennial confusion. Perhaps someday she will find the right anchor. Then she won’t have to wonder if the big Dude is still around.