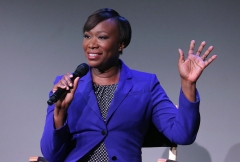 Twice in one week, senior pundits at MSNBC have compared Christians to the Taliban.

On Saturday, MSNBC host Joy Reid, speaking of the Taliban, tweeted that "our own far religious right" is "dreaming of a theocracy that would impose a particular brand of Christianity" on American society.

On Wednesday, the lead story on MSNBC's website, written by Dean Obeidallah, picks up on the comparison by criticizing Republicans who cling to "a narrow reading of their religion's beliefs," suggesting that they want to make their "religious beliefs into the law of the land."

In both cases, the MSNBC pundits claimed that Christians are, just like the Taliban, against women's rights. (They couldn't have been thinking about Andrew Cuomo because the "former altar boy" is a Democrat.)

Reid accused Christians of wanting to "drive women from the workforce and solely into childbirth, and control all politics." What a plainly stupid remark. Perhaps she can explain why a record number of Republican women—35 of them—were recently elected to Congress. They are all Christians.

Regarding abortion, Christians are committed to protecting the life of unborn babies. The Taliban are known to kill pregnant women such as Masooma, who was dragged out of her house in 2019, taken to a Taliban court, shot dead, and had her corpse, and that of her baby, thrown into an open field. Her crime? She criticized the Taliban for committing atrocities.

Christian Republicans opposed the reauthorization of the Violence Against Women Act because it redefined "domestic violence" to mean wholly non-violent acts such as "verbal" and "emotional" abuse. If that is the standard, then we will have to restock all the prisons recently emptied by Democrats.

Now how about the way the Taliban treat women? Here's a quick sample.

In July, it was reported that the Taliban were ordering imams and mullahs in the Middle East to provide them with a list of girls above 15, and widows under 45, to be married to Taliban fighters. They are then treated as sex slaves.

Now there are reports that this is already happening in Afghanistan as the Taliban are going "door-to-door" looking for girls as young as 12 to become "sex slaves."

Those who compare conservative Christians to the Taliban evince an extreme anti-Christian bigotry while denigrating the condition of women who are forced to live under Taliban rule. The comparison is obscene. So is MSNBC for giving these bigots a platform.