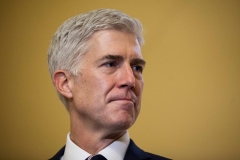 We stand with the president of the U.S. Conference of Catholic Bishops, Archbishop José Gomez of Los Angeles, who said that the Supreme Court "effectively redefined the legal meaning of 'sex' in our nation's civil rights laws." He also noted that this ruling "will have implications in many areas of life."

Among those areas is the fate of religious liberty. Writing for the majority opinion, Justice Neil Gorsuch said he was "deeply concerned with preserving the promise of the free exercise of religion." He then blithely indicated that such "worries" about how this ruling might negatively impact on religious liberty are "nothing new."

Gorsuch's response was not reassuring. This explains why Justice Samuel Alito, in his dissenting opinion (joined by Justice Clarence Thomas), raised a series of problems with it.

Alito noted that a "wide range of religious groups—Christian, Jewish, and Muslim—express deep concern that the position now adopted by the Court 'will trigger open conflict with faith-based employment practices of numerous churches, synagogues, mosques, and other religious institutions.'"

Alito anticipates a realistic problem. What would happen if a religious school, one that teaches that "sex outside of marriage and sex reassignment procedures are immoral," were to employ a teacher who is in a homosexual relationship, or no longer identifies with the sex he or she was assigned at birth?

To keep such teachers on staff would be to undercut the credibility of the religious school's tenets, effectively neutering its doctrinal prerogatives. This is not a hypothetical.

Many Catholic schools have been targeted by homosexual activists to challenge the right of the school to discharge, or not renew the contract of, such teachers. How will matters play out in this new world where there is no legal difference between sex, sexual orientation, and gender identity?

What about religious hospitals? Will Catholic hospitals, for instance, be permitted to decline requests for sex reassignment surgery? Again, this is not a "maybe" issue—such lawsuits have already been filed.

Gorsuch opines that the high court will get to these issues when they are before it.

His language is broad and his reach is wide. Surely he knows that the majority opinion is going to open the legal floodgates. Not to provide more assurance to religious institutions, as well as to other organizations touched by this decision (e.g., women's sports), is to entice agenda-ridden activists and lawyers to mobilize.

When it comes to controversial moral issues being settled by judges, prudence dictates that the rulings be narrowly focused. This is one of many areas where the majority opinion failed us.