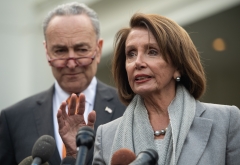 According to House Speaker Nancy Pelosi, the Equality Act is about "ending discrimination;" President Joe Biden agrees. That may be its intent, but its effect is to promote the most comprehensive assault on Christianity ever written into law.

This explains why the United States Conference of Catholic Bishops has been fighting this proposed law for years. Most recently it said the Equality Act would "discriminate against people of faith." The Catholic League and many other civil rights and religious organizations have also sounded the alarm.

The Equality Act has two major goals: it would amend the 1964 Civil Rights Act to include sexual orientation and gender identity to the definition of sex; it would also undermine the Religious Freedom Restoration Act by allowing gay rights to trump religious rights.

The 1964 Civil Rights Act was primarily motivated by a desire to end racial segregation. It banned discrimination based on race, sex, or national origin. That was it. It said absolutely nothing about sexual orientation, and it certainly didn't address transgender rights—that wasn't even a concept in the 1960s. Adding sexual orientation and gender identity to this law not only violates the intent of the legislation; it unduly burdens houses of worship and other religious organizations.

In order to end racial segregation, the 1964 Civil Rights Act banned discrimination in public accommodations. Blacks had historically been denied services in many public facilities, ranging from diners to hotels. The Equality Act goes way beyond this, so much so that it disfigures the meaning of this historic 1964 law.

The Equality Act not only covers homosexuals and transgender persons; it expands public accommodations to include consumer services such as healthcare. In practice this would be a disaster. It would mean, for example, that healthcare providers would be forced to provide hormone therapies and surgical procedures that are required to change the physical characteristics associated with sex changes.

One does not have to be a Catholic healthcare practitioner to register moral and religious objections to this "healthcare" initiative. Will anyone be allowed to voice objections to these procedures, pointing out the long-term physical and mental problems associated with sex reassignment? What about parents who learn that their child wants to switch his or her sex? Will their rights be respected or eviscerated?

It has become increasingly clear that the expansion of rights to transgender women—really biological males who identify as female—has come at the expense of rights for biological females. Take sports.

Boys and men would be allowed to compete in sports with girls and women, thus unfairly altering women's athletics. Females would also lose their privacy rights. These biological males can use the locker rooms, restrooms, and shower facilities that have always been reserved for females. None of this has anything to do with why the 1964 Civil Rights Act was passed. Similarly, rights that have never been envisioned for homosexuals are also affected by the Equality Act.

The 1964 Civil Rights Act specifically banned preferential treatment in law. Nevertheless, the courts have invoked this law to justify affirmative action for blacks. Were the Equality Act to become law, it would mean that homosexuals could now insist that they are entitled to preferential treatment. Yet it is well established that homosexuals, both men and women, earn more income than their heterosexual counterparts. The economic condition of gays is nothing like that of African Americans.

In 1993, Rep. Nancy Pelosi and Sen. Chuck Schumer co-sponsored the Religious Freedom Restoration Act (RFRA); it was signed by President Bill Clinton. This was a major victory for religious liberty. But now Pelosi and Schumer regret their vote, even to the point of supporting the Equality Act, knowing full well that it exempts itself from RFRA! This is perverse. There could be no more serious undercutting of religious liberty than what they are proposing.

It would mean that Catholics, evangelicals, Orthodox Jews, Mormons, Muslims, and many other religious communities could not raise religious liberty objections to any of the aforementioned rights of transgender women. In effect, religious entities would be secularized.

For example, if the Equality Act were to become law, Catholic foster care programs would be shut down. They would either have to agree to allow two men to adopt children—a clear violation of Church teachings—or lose federal funding. This is the kind of "gotcha" type element that makes this bill so pernicious.

Currently, Catholic hospitals can legally refuse to perform abortions. Under the Equality Act, they would either lose federal funding or be forced to get into the abortion business. That is because refusing abortion services would be declared "pregnancy" discrimination.

Without the religious liberty protections afforded by RFRA, virtually every religious institution—from houses of worship to schools—would be expected to fall in line with this radical legislation. Catholic schools, for instance, would be expected to change their teachings on sexual ethics to suit the radical LGBT agenda.

It is hard for the public to understand, especially Catholics, why such allegedly "devout Catholics" as Biden and Pelosi would want to champion such patently anti-Christian legislation as the Equality Act.