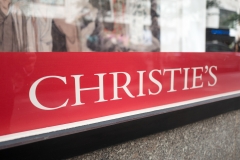 Now that we are at the beginning of the Christmas season, it is only fitting that the rich and powerful flex their bigoted muscles by attacking Christian sensibilities. Enter Christie’s, the auction house that is known for appealing to morally challenged tastes.

From November 30 to December 3, Christie’s 3.0 will debut the first non-fungible token (NFT) version of Andres Serrano’s “Piss Christ” in Miami. It is part of the Next Wave: The Miami Edit.

What is the cause of this celebratory event? Christie’s wants to revisit what it calls the three “vandalisms” of Serrano’s artwork.

Christie’s is proud of its latest milking of “Piss Christ.”

“The dynamic video NFT replicates three historic vandalisms of the original 1987 photograph on a yearly cycle. Skilfully [sic]applying the time-based mechanisms of digital art, Serrano both archives and transforms the story of his infamous photograph, underscoring its enduring legacy in the history of art and the right to creative expression.”

This statement demands a rebuttal. Were not the alleged vandals themselves involved in “creative expression”? Who is Christie’s to stigmatize these artists?

This position needs to be taken seriously given the fact that the NFT is being produced in collaboration with an entity called apolitical. It bills itself as an organization that “explores radical knowledge through the principle of Cultural Terror. Working with artists and agitators, the collective platforms voices that interrogate the critical issues and dominant narratives of our time.”

In other words, a more tolerant view of the so-called vandals suggests they were really “agitators” inspired by the “principle of Culture Terror.” Their goal was not to be destructive, but to “interrogate the critical issues and dominant narratives of our time.” Seems to me they hit it out of the park.

Christie’s needs to stop being so closed minded. Its understanding of “art” needs to become more inclusive.

To see a video on “Piss Christ” that Bill Donohue did ten years ago, click here.