California Bill Manages to Be Both Anti-Catholic and Anti-Poor 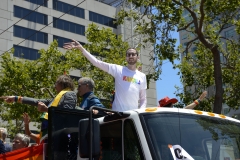 The California State Senate is moving at full speed to pass the Equitable and Inclusive UC Healthcare Act. This legislation seeks to break existing partnerships between the University of California and hospitals, particularly Catholic ones, that refuse to offer elective abortions, sex reassignment surgeries, and sterilizations.

For all the talk of "inclusive care" and "a full range of healthcare services," in reality this bill would leave tens of thousands without access to the high quality healthcare Catholic hospitals provide.

If the Equitable and Inclusive UC Healthcare Act were to become law, UCLA would have to break its contract with Dignity Health, which operates several specialty clinics, including a cancer treatment center and a pediatric trauma center. Other partnerships UCLA has with Catholic hospitals, including a cleft palate treatment center, a post-transplant care unit, and a pediatric and neonatal surgery facility would also have to come to an end.

Elsewhere in the Golden State, UC Davis would have to terminate its jointly run cancer treatment center with Mercy Medical Center in Merced, while St. Mary's Medical Center could no longer administer San Francisco's only inpatient adolescent psychiatry program with UC San Francisco.

Ultimately, all of these would leave patients without access to life-saving treatments.

"It's only going to take away [healthcare] from the poor and vulnerable," said Lori Dangberg, vice-president of the Alliance of Catholic Health Care. To further this point, Dr. Carrie Byington, executive vice-president of UC Health, said that "low-income and rural communities and people of color" would bear the brunt of the reduced access to care that could be "life threatening [in some instances] and exacerbate health disparities."

Regardless of the people that would be left without healthcare, Equality California, NARAL Pro-Choice California, and the ACLU of California continue to promote this legislation. So driven by secular madness to force Catholics out of the medical field, these groups do not care how many people lose the service they need.

While it is bad enough to support this perfidious bill knowing that it would prevent tens of thousands of people from accessing treatment, it is even worse to be its author. Considering its adverse impact on so many Californians, a reasonable person wonders about the priorities of someone who could propose legislation that would deny healthcare to those in need. That distinct privilege belongs to state Sen. Scott Wiener (D-CA).

In 2019, Wiener commented on the Covington Catholic students, calling them "those jackass MAGA kids." He went on to assert the erroneous claim they were harassing a Native American elder while chanting "build the wall."

Earlier this year, Wiener objected to the Vatican's ruling on blessing same sex unions. He offered his own teachings for the Church, saying, "what's 'sinful' is a Church that continues to dehumanize [and] stigmatize an entire community....The Catholic Church leadership needs to enter the modern world."

Another staple for him on Twitter is showing support for the Sisters of Perpetual Indulgence, a protest and street performance organization that insults nuns and that uses drag and Catholic imagery to attack Church teachings. In April, he tweeted out pictures of a mural celebrating their efforts to assault Catholicism.

Beyond the attacks found on his Twitter page, as a state legislator, Wiener has a platform to act upon his disdain for Catholics, and sponsor bills that undermine the Church.

From his public comments to his public policy, Wiener has a long record of bashing Catholics and promoting policies that work against the Church. The Equitable and Inclusive UC Healthcare Act is just another attack on Catholicism from an ardent enemy of the Faith.

It is a sad commentary on our society when those who harbor an animus against Catholicism do not care who they hurt, including the poor. So much for diversity and equity.