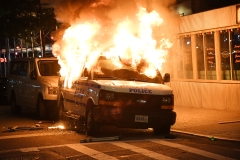 Bishop Robert McManus, who heads the Diocese of Worcester, has notified the College of Holy Cross that he will not attend the school's commencement on May 27. He made his decision after the school's president, Vincent Rougeau, was petitioned by some students, faculty, and alumni to disinvite him. This marks the fifth consecutive year that the bishop has not attended a graduation ceremony at the Jesuit school.

This year the source of the controversy began on April 3 when McManus issued a statement that was critical of the Nativity School, a middle school affiliated with Holy Cross. The school had been flying a Black Lives Matter and a gay pride flag next to the American flag for over a year, but was only recently brought to the attention of the bishop. When he learned of what was going on, he asked the school to stop flying the two flags. That request sparked the online petition.

In his public statement on this issue, McManus wrote that while the Catholic Church respects everyone equally, "the flag with the emblem Black Lives Matter has at times been coopted by some factions which also instill broad-brush distrust of police and those entrusted with enforcing our laws." He also said that "gay pride flags are often used to stand in contrast to consistent Catholic teaching that sacramental marriage is between a man and a woman."

"As the Bishop of this diocese," McManus said, "I must teach that it is imperative that a Catholic School use imagery and symbols which are reflective of that school's values and principles so as to be clear with young people who are being spiritually and morally formed for the future."

Bishop McManus is to be commended for telling the truth. If anything, he was too kind.

Black Lives Matter has not been coopted by anyone — from the very beginning this Marxist, anti-Christian organization has been very specific about its goals. It has explicitly called for the destruction of the nuclear family. As I have said before, this is precisely the kind of objective that the Klan would endorse. Nothing would further punish the black poor more than to further destabilize the intact family.

It is striking how the same left-wing students, faculty, and alumni that deplore violence stand in unison with an organization that is responsible for the murder of at least 25 persons and has engaged in arson, vandalism, and looting, often in black neighborhoods. The cost of its wanton destruction is upwards of $2 billion. White supremacists couldn't have done a better job.

How ironic that these brave Catholic students are still defending an organization whose leaders have ripped off the public — no one more than blacks — by buying mansions for themselves, leaving the black community high and dry. Their refusal to pay taxes is now under investigation throughout the nation.

Flying a gay pride flag at a Catholic school sends an unmistakable message: We don't buy the Church's teachings on sexual ethics. As such, it is not a plea to respect homosexuals: on the contrary, it is an in-your-face rejection of Catholicism. That this should take place at a time when child abuse is taking place in some schools, and parental rights are under attack — in the name of sexual orientation and gender identity — makes the flag issue all the more reprehensible.

It is a shame what has happened to Holy Cross. It is not the college that once made so many of its graduates proud.

We cannot allow those who are responsible for this travesty to carry the day. We need to show our support for the courageous stance taken by Bishop McManus.