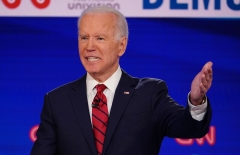 Anti-Catholicism is engulfing the Biden camp. The latest guilty party is Nikitha Rai.

We learned today that Rai, who is deputy data director for the Biden campaign, is incensed over the nomination of Amy Coney Barrett to the Supreme Court. She argues that Barrett's Catholic beliefs should bar her from serving.

On Sept. 28, Rai had a Twitter exchange with Shadi Hamid, a senior fellow at the Brookings Institute. At issue was Barrett's alleged membership in a charismatic Christian organization that holds to traditional moral values. Biblical teachings on marriage and sexuality became the topic of discussion.

After someone else made reference to these teachings, citing Barrett's previous service to a "South Bend private school" [she was a trustee at Trinity School], Hamid questioned why this was news.

"Isn't this the standard position for any orthodox Catholic?"

Hamid then said, "to be fair, it's the standard position for any orthodox Muslim or Jew as well."

Rai's response was unequivocal. "True. I'd heavily prefer views like that not to be elevated to SCOTUS, but unfortunately our current culture is still relatively intolerant. It will be a while before those types of beliefs are so taboo that they're disqualifiers."

In other words, any person of faith who holds to biblical teachings on marriage and sexuality is intolerant and should be barred from serving on the Supreme Court. That would include all practicing Catholics, evangelical Christians, Mormons, Muslims, and Orthodox Jews.

Nikitha Rai is the intolerant one. Her rank bigotry disqualifies her from serving in the Biden campaign. She should be dumped immediately.