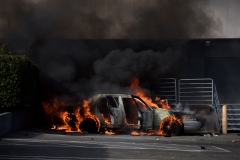 A car in flames is pictured during a demonstration over the death of George Floyd while in Minneapolis Police custody, in Santa Monica, Calif., on May 31, 2020. (Photo credit: AGUSTIN PAULLIER/AFP via Getty Images)

The media and left-wing activists never expressed anger when Catholic churches and iconic Catholic statues were being vandalized and destroyed by Antifa and Black Lives Matter, but now—all of a sudden—they are up in arms over BLM banners being torn down and burned outside black churches in Washington D.C. Their selective outrage is stunning.

On Dec. 15, the Associated Press (AP) ran a big piece on the BLM banners. It claimed that black churches were vandalized. They were not. It was BLM banners displayed outside the churches that were torn down and burned: The churches themselves were not damaged in any way. By contrast, to cite one example, last spring BLM supporters spray-painted obscenities on the exterior wall of New York's St. Patrick's Cathedral. Yet there was no comparable outcry from those upset about BLM banners being burned.

To its credit, AP proved to be the most fair of any media outlet. It not only covered the BLM banners that were vandalized, it covered the several instances this year when statues of St. Junípero Serra were toppled by left-wing activists. Unfortunately, it was an anomaly among the big media. The New York Times and the Washington Post covered the BLM incident but had no news story on the multiple Serra incidents.

The burning of BLM banners was cited by CBS, CNN, Fox News, MSNBC, and PBS. Only CBS and Fox News mentioned the destruction of statues of St. Serra. Moreover, the attack on this heroic priest extended over several months in many cities; it was not just one weekend of violence.

It is not just the smashing of statues of St. Serra that Catholics have endured this year.

In June, the Catholic Basilica of St. Mary in Minneapolis was set on fire. Catholic churches near the University of Mississippi were vandalized. The Cathedral Basilica of the Immaculate Conception in Denver was trashed. Windows were smashed in Dallas at St. Jude Chapel and at the Cathedral of the Assumption in Louisville. Swastikas and anti-Catholic scribbling was found on the graves of several Dominican friars on the campus of Providence College.

In July, a statue of Our Blessed Mother was set on fire in Boston and another statue of the Virgin Mary was vandalized in Queens. In Ocala, Fla., a man crashed his minivan into a Catholic church while parishioners gathered for Mass; he then poured gasoline in the church's foyer and set the church ablaze. San Gabriel Mission Church in Los Angeles County was set on fire, destroying parts of the 249-year-old iconic structure. Vandals were charged with a hate crime after they partially disfigured Mission San Jose, a church in Fremont, Calif.

Also in July, Sacred Heart Catholic school in Gallup, New Mexico was broken into and a statue of Jesus was vandalized. A statue of Jesus was beheaded at Good Shepherd Catholic church in South Florida. "Satanic" and "anarchist" symbols were found on the church door at St. Joseph's Church in New Haven. In August, Bibles were burned in Portland.

In a sane world, we could all agree that vandalism of any kind is morally wrong. But we don't live in such a world.

Nikole Hannah-Jones, the Pulitzer Prize-winning journalist responsible for the New York Times' historically flawed "1619 Project," says, "destroying property, which can be replaced, is not violence."

David Remnick of the New Yorker is a big fan of BLM. He quotes, with relish, a co-founder of the racist organization. "We don't have time to finger-wag at protesters about property. That can be rebuilt." So could his house if someone torched it.

Two left-wing geniuses, Robin D.G. Kelley, an historian at UCLA, and R.H. Lossin, whose Ph.D. in communications is from Columbia, both wrote lengthy defenses this past June about the violent Antifa and BLM mobs.

Kelley wrote in the New York Times that because "we are in the worst economic downturn since the Great Depression, looting should not surprise anyone." But the looters stole toasters, not bread. They also helped themselves to pricey sneakers and jewelry, neither of which is edible. No matter, he chided the public for "obsessing over looting."

Lossin wrote her screed in the pages of the Nation, a Stalinist media outlet. "Property destruction is not synonymous with the violence that is being protested," she opines. "Plateglass windows don't bleed."  Neither does her laptop. But it's a sure bet she would object if a sledgehammer were taken to it. She is also no fan of non-violence. "The notion that nonviolence is tactically more effective...has not only been proven wrong over the past week by sheer numbers; it cannot be historically supported."

It would be hard to find a single professor of a conservative bent (thanks to the "tolerant-minded" professoriate, there aren't too many of them) who would belittle property crimes and denounce peaceful protests. Such sages are only found on the Left.

Forgive me if I can't get too exercised about BLM banners being set on fire. Antifa and BLM burn the American flag, churches, Catholic schools, and cop cars. The media and left-wing activists have no moral ground to stand on when they bash those of us who object to the latter while they go bonkers over the former.