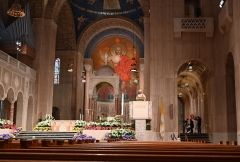 Reverend Wilton D. Gregory, Archbishop of Washington, celebrates an Easter Sunday mass in front of empty pews at the Basilica of the National Shrine of the Immaculate Conception in Washington, D.C. on April 12, 2020 as the Basilica remained closed to the public during the COVID-19 coronavirus pandemic. (Photo credit: EVA HAMBACH/AFP via Getty Images)

About three-quarters of Catholics (76%) suggest abortion should be illegal in some cases but legal in others. This means the vast majority of Catholics reject the provisions of Roe v. Wade, which allows abortion through term.

With regard to party affiliation, 59% of Republican Catholics believe “life begins at conception.” Among Catholic Democrats, the figure is about half that. The latter is somewhat more opposed to abortion at each stage of pregnancy than Democrats overall, but they are not nearly as opposed as Catholic Republicans are.

Both reports show that Catholic schools matter. It should also matter with regard to the distribution of diocesan funding. While care for the needy must continue, there seems to be more tolerance for closing Catholic schools than there is for cutting social programs.

There is not much the bishops can do about the difference between Catholic Democrats and Catholic Republicans. This is made especially difficult given our pro-abortion “devout Catholic” Democrat president. But some bishops have been more vocal than others. Silence in the face of death is no virtue.