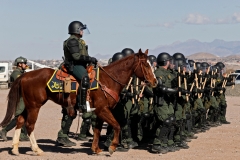 U.S. Border Patrol agents conduct a training exercise in the Anapra area, in front of the wall that divides Sunland Park, New Mexico, US, from Mexico, as seen from Ciudad Juarez, Chihuahua state, on Jan. 31, 2020.

In a recent post, I detailed how, in a one-week period, Border Patrol agents saved a number of aliens entering illegally from almost certain death (just a few of the 3,854 search-and-rescue missions they have mounted thus far in FY 2020). A Saturday tweet, from McAllen Station Chief Patrol Agent Brian Hastings, shows that Border Patrol is saving the lives not only of illicit migrants, but likely many Americans, as well:

AMMUNITION SEIZURE:
Early this morning, McAllen Station agents attempted to arrest 3 subjects that illegally crossed the border. As the men fled back to Mexico, they dropped a backpack containing 7 AK-47 magazines and 740 rounds of 7.62 ammunition. #BorderSecurity pic.twitter.com/oq5Hx9LxB3

For those otherwise untutored in firearms, "AK-47" is the common name for the Model 1947 Kalashnikov assault rifle, described by Encyclopedia Britannica as "possibly the most widely used shoulder weapon in the world." It is likely the most recognizable, too, appearing (among other places) on the flag of Mozambique. Making up an estimated 10 percent of firearms globally, they are the weapon of choice for many around the world.

Should you be in the market, the AK-47 is "simple to operate, rugged, [and] reliable under trying conditions." Plus, it fires 600 rounds per minute. When I lived in Maryland, however, I could not purchase one: They are banned there. In 2014, then-President Barack Obama also banned their import into the United States (as Chief Hastings' quote shows, however, that has not stopped some people).

And, if the 7.62 round sounds familiar, it may be because it was the ammunition that was used in a June 2017 shooting at an Alexandria, Va. baseball practice field, in which House Majority Whip Steve Scalise and four others were wounded by James Hodgkinson ("a 66-year-old Bernie Sanders devotee with a digital trail of railing against Republicans"), who was subsequently killed by police. Rep. Scalise nearly lost his life and was not able to return to work for months.

I am never one to assign base motives to others, but the combination of magazines for powerful firearms and a huge amount of deadly ammunition in the possession of illegal entrants near the border suggests to me that the three individuals were smugglers — likely drug smugglers, but possibly illegal weapon smugglers, instead or as well. As AK-47 magazines and 740 rounds of 7.62 ammunition are virtually worthless without one or more AK-47s, the trio either took their weapons back with them, or were planning to meet up with unidentified confederates on the American side.

And given the fact that the Mexican side of the southern border is tightly controlled by one or another cartel (in this area, the Gulf cartel, or "CDG"), the three were likely either in the employ of CDG or were affiliated in some way with the group.

Cartel members (or affiliates) armed with powerful automatic or semi-automatic weapons on the U.S. side of the southern border should give even the most vehement open-borders opponents of CBP pause. I doubt seriously that CDG would be looking to pick a fight with the U.S. government, but you don't tote that kind of equipment around the border simply to show it off to your friends. Either they were protecting drugs or other contraband they returned across the border with, or they had some other business in south Texas. Neither scenario is a good one for public safety.

This shows that, contrary to the opinions of some, not all "out of status immigrants" entering illegally are coming here simply "hoping for a better life". An untold number are intent on committing criminal acts, or (like smugglers) are simply extending their criminality across the border. For them, the border is their workplace.

For the Border Patrol agents whose job it is to confront them, such criminals pose an existential threat. Most agents are carrying just a .40 pistol or the new 9mm model, and are protected by little more than body armor. Had the three absconders in the chief's tweet been dogged enough and gotten the drop on the agents, the agents would not have stood a chance.

Again, most migrants enter illegally simply to live and work in the United States indefinitely, taking advantage of the comparably better U.S. economy and the security of the rule of law in this country. As this episode illustrates, however, "most" does not mean "all."

If the trio were drug smugglers, and Border Patrol had not stopped them, their goods would be in the process of poisoning our communities.

But as most Americans can freely purchase firearms, if weapons were the trade of the three, the buyers would have been those criminals who cannot buy weapons legally, or who don't want to leave a paper trail. The ultimate carnage in that situation would likely be even more direct to someone somewhere.

In either case, we should be grateful that there are men and women who are willing to put their lives on the line to protect our us from such threats. The border is their workplace, too — and a dangerous one, at that.

Andrew “Art” Arthur serves as resident fellow in law and policy for the Center for Immigration Studies, a Washington, D.C.-based research institute that examines the impact of immigration on American society.

Editor's Note: This piece originally appeared on the Center for Immigration Studies.