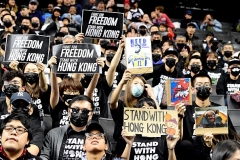 Protesters hold signs referencing Tibet and Honk Kong during the preseason game between the Brooklyn Nets and the Toronto Raptors at Barclays Center on October 18, 2019 in New York, New York. (Photo by Steven Ryan/Getty Images

I have not commented much on the ongoing issue of the National Basketball Association and Communist China. However, after the quite insidious comments of LeBron James and Charles Barkley about the situation, I must break my silence.

This entire conundrum began with what anyone with common sense would embrace as an appropriate twitter post by Houston Rockets General Manager, Daryl Morey. Who would not agree with standing with the young people of Hong Kong who are marching in the streets, singing our National Anthem, and carrying our American flag?

These young people are refusing to surrender to the tyranny of a brutal communist regime in Beijing. They are making a stand which young people did in mainland China thirty years ago in a place called Tiananmen Square. And one must ask a simple question, when did playing a game become more important than human rights, the principles of liberty and freedom.

I find it abjectly unconscionable that LeBron James would chide Mr. Morey stating that perhaps he did not understand the situation. That Mr. Morey should better educate himself on what is happening in Hong Kong, excuse me, but that is one of the most ignorant statements I have heard this year. And folks, considering the debut of Alexandria Ocasio-Cortez and her ilk, that is saying a lot.

In 1997 the British relinquished their control of Hong Kong, a thriving example of free market economics, and entrepreneurship. The guarantee given by China was that Hong Kong would retain its freedoms, liberties, and independence of law for fifty years, 2047. But, as we have seen with all things Xi Jinping, self-declared communist dictator for life, China has become more repressive than ever.

In China today we are witnessing the return of concentration camps, the suffering of the Uighurs, a Muslim minority. Christians are having their churches under surveillance and some even being burned by the Chinese government. There has been the institution of a cultural point system which leads to further individual persecution and restriction of rights.

The young people in Hong Kong are rejecting this, yet our young people here in America are embracing that very same philosophy of governance, that tyranny. Let us never forget that it was Vladimir Lenin who asserted that “the goal of socialism is communism”. Socialism is an economic model that leads to a societal restructuring, and a shared state of misery, unless you are the political, cultural, media, academic, and entertainment elite who are above the repression.

And so it seems with the NBA and some of their players, and former players like Barkley, who prefer the comfort of their lifestyle over human rights. For the NBA to cast aside the clear violations of human decency for lucrative financial deals it very disconcerting.

And to watch these social justice warriors, coaches and such, who do not hesitate in condemning our America cower before communist China is truly disgusting. The message they are sending to the young people in China is that being on TV and selling jerseys is more important than their freedoms…sadly, situational ethics is the raison d’etre of these, well, cowards.

How great would it have been if the NBA came out and stated, we stand with the young people in Hong Kong. We agree with Daryl Morey. How awesome would it have been for the NBA to tall China, we do not want to be broadcast in your country. We do not want to play games there, nor have our jerseys sold in China. We, the NBA do not believe that a game is more important than liberty, freedom, and human rights. We will look for other markets, nations, to promote the NBA because we live in America. We believe in individual freedom. If China decides one day to embrace freedom and cast aside its brutal, tyrannical, and repressive communist ways, we will gladly return to a free China.

Why not have the NBA open up and play more games in Taiwan? What about South Korea? Maybe even try and make a difference in Thailand, Singapore, Australia, the Philippines, or maybe even Vietnam?

Instead China’s Xi Jinping and his communist cronies are emboldened and continue to issue threats to American companies and sports organizations. Since when did our American companies come to believe that pandering to communists was a viable way of doing business? Is turning a profit so much more important that human rights? And when did America embrace the ideal that it needed to depend upon a communist Country, eschewing our sense of national pride, dignity, and values?

Over these years we have falsely believed that allowing China to enter the global economy would change their abhorrent behavior, nothing could be further from the truth. Instead, we have allowed China to become a tick gorging on our blood, and we now find it too painful to remove the parasite.

And China has taken this economic boon and invested not in a better quality of life for its citizens, but instead invested in growing its military capability, and might. China is looking to expand it hegemonic dominance, and it will be our Men and Women in uniform who may one day have to face a belligerent and obtuse, expansionist China. And if you have not read China’s One Belt, One Road strategic plan, you should.

I must ask, has LeBron James, Charles Barkley, or Steve Kerr if they have read that strategic document? I guess these gentlemen are not as “woke” as they think they are.

Basketball is a game. It is not life, perhaps a lifestyle. However, it is a lifestyle enabled by the fundamental principles and values of our Constitutional Republic, individual liberty, freedom, and unalienable rights.

Maybe the NBA and its players should stand watch on a US Naval vessel patrolling the seas facing the threat of the very communist China they are cowering to…after all, our Soldiers, Sailors, Airmen, and Marines provide the blanket of freedom so grown men can play a game.