Allen West: Liberty or Tyranny? We Have a Choice to Make, America 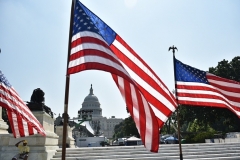 Last week former President Barack Obama appeared with his former Vice President “Basement” Joe Biden in a video conference. I was truly taken aback when Obama referred to what is happening in America as an “awakening,” a “movement.”

It was at that moment that I reflected upon how Obama and his administration responded to a real awakening -- a movement that occurred during his presidency.

In 2009, in response to the increased government spending stimulus programs and the Patient Protection Affordable Care Act, aka “Obamacare,” a constitutional conservative grassroots organization was born. The organization focused on one issue, the fiscal responsibility of the federal government. The organization called itself the TEA Party, which stood for “Taxed Enough Already.”

This movement was about restoring our constitutional Republic to its foundations, its fundamentals. Based on principle and policy, it did not agree with the Obama vision of “fundamentally transforming” these United States of America.

The reaction to the TEA Party movement was incredibly dismissive and disrespectful. “We call it AstroTurf,” Rep. Nancy Pelosi said at the time, meaning a fake grassroots movement to keep the focus on “tax cuts for the rich.”

Then came the 2010 midterm elections, Obama’s first, and it was historic. The Democrats lost their majority in the U.S. House of Representatives when 63 congressional seats shifted. I came into the political arena during this period, and I was part of that shift, based upon constitutional principle. The progressive socialist left had experienced something they were not used to -- a conservative grassroots movement – local, principled, community organizing by the right.

This got the attention of the left in America and Obama. And the vitriol, the incessant attacks, increased, aimed at simple, everyday Americans who were exercising their First Amendment right to petition their government for redress of grievances. They stood up. They spoke up. They held rallies. They voted. They cleaned up after their rallies. They never enacted any form of violence. They never destroyed property. They never took over major portions of cities. They never said they were going to burn down the system.

Yet, the ire and angst of the Obama administration was aimed at them, as well as the collective power of the progressive socialist left, including their media accomplices. The TEA Party now found itself assailed on all fronts. They were demonized as racists, just because they disagreed with the policies of a president who just happened to be biracial but was promoted as Black. And how confounding it was when Black conservatives were embraced by the TEA Party -- they were sellouts, Uncle Toms, oreos, and other disparaging monikers.

The TEA Party was denigrated as an extremist group for daring to want fiscal responsibility and discipline from their federal government. It was as if the left was declaring that our very Constitution was extreme. We all know that to not be true, but what the left was saying was that anyone disagreeing with them was an extremist. It went so far that some leftists and Democrats denounced the TEA Party as terrorists, with no proof of any violent actions.

President Obama, the Democrats, and the progressive socialist left knew one thing -- they had to crush, destroy, the TEA Party before Obama’s reelection bid in 2012. And they did just that by employing the power of the Internal Revenue Service (IRS).

Today, we turn on the news and we see the anarchist organization, Antifa, which has been designated as a domestic terrorist organization. We have watched them enact violence in our streets, destroy property, attack those with whom they disagree.

An avowed Marxist organization that cleverly named itself Black Lives Matter is now calling for violence against our law enforcement officers, and most recently, its leader in New York City declared that if their demands were not met, they would “burn down the system.” Those are the words of insurrection, the actions of an insurgency, yet the lips of the Democrat elected officials are sealed.

And Barack Obama refers to this wanton violence, the destruction of memorials, monuments, and our history as “an awakening.” In other words, Obama and his ilk are embracing the radicalism, the despotism, the tyranny we are seeing on our streets. The media that once disparaged the TEA Party as extremists, terrorists, racists, turn a blind eye to leftist intimidation, fear, coercion, and violence.

Sadly, few are talking about this comparative analysis of how the left, the Democrat Party, unleashed the full weight of the federal government against a constitutional conservative grassroots movement. And how, in the face of abject sedition, they are all silent.

Let us not forget the Clinton administration and how it used the power of the federal government in Waco, Texas against the Branch Davidians. Or how little Elian Gonzalez was ripped from his family at the hands of armed federal government agents. And why is it that we allow the left to always own the narrative and refer to conservatives as violent and extremists?

Here is what we had best learn -- real fast: Socialism, communism, statism, fascism, Marxism are philosophies of governance, ideologies, that cannot advance on their own merit. Advancement can happen only by what we see happening in the streets of America – fear, threats, intimidation, coercion, and violence.

That is the nature of leftism. That is why Hitler had the Brown Shirts. That is why Nicolas Maduro has the “Colectivos.” And that is why the Democrat Party has Antifa and Black Lives Matter.

The TEA Party was a grassroots movement, an awakening. What Obama will not condemn is a blatant insurrection, an insurgency -- and of course he will not, because he embraces the maxim of “by any means necessary” for his fundamental transformation to come to fruition.

We have a choice to make, America.

We can surrender to the “woke” mob of tyranny -- or we can become “awoke” as true Patriots to our commitment to individual liberty. Just know, you cannot compromise, appease, negotiate, or acquiesce with the mob, evil, it only emboldens them. The left is fully committed to crushing all political opposition, and Obama once asserted such.

It’s liberty or tyranny.  This week, 244 years ago, we made that decision. Time to make it again.