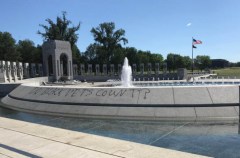 A photo shared by the Friends of the National World War II Memorial shows spray-paint vandalism. (Photo from @WWIIMEMORIAL/Twitter)

Antifa and its allies "want us to hate our country like they hate our country," and signs of that hatred are evident on the National Mall, Fox News's Laura Ingraham told her audience Tuesday night.

She saw those expressions of contempt for America first-hand before heading to work:

Now, today, to clear my head, what I did is I went on a bike ride. I know that sounds frivolous at a time like this, but I had to clear my head -- it's one of those days. And I took my oldest son around the north side of the National Mall. But what I saw when I was there made me want to cry.

I've lived here for 30 years, and the only time before today that I saw National Guard troops around our national monuments was after 9/11. But there they were, dozens of them, guarding the Lincoln Memorial, the Korean War Memorial, the Vietnam Memorial and the World War II Memorial. Now, a few days earlier, though, the World War II Memorial had been vandalized with spray paint.

For the extremist radicals, nothing, not even a place of honor such as this is sacred. Well, once again, they misread the American people. These sites and what they represent, whom they honor, are sacred to us. So what did we do?

Well, my son and I, we stopped, and we said a short prayer, and then I proceeded to thank every member of the Guard that we came upon. And I told each and every one how much we appreciated them. It was a cross-section of America, African-American men and women serving alongside white men and women, mostly young. They were keeping watch as runners, tourists streamed by, some protesters, but it was quiet.

Now, presumably they're more worried about what happens at night tonight in Washington, and we hope for the best, when those brave spray-paint militants come out to desecrate and destroy. Of course, none of them know what real sacrifice is, for if they did, they'd be doing something positive with their lives.

The way forward for the rest of us, though, requires that we get back to basics. We don't need a new normal. We just need normal. Because normal Americans want a fair and just society where the rule of law applies equally to all people regardless of race. Normal Americans are disgusted by the killing of George Floyd. Normal Americans think the current situation is so out of control that the U.S. Military needs to be called in to bring order to the streets.

Ingraham said "prosperity" for all people, especially African-Americans, is the path to peace, and she noted that Donald Trump's efforts to produce prosperity were succeeding before the coronavirus pandemic hit.

"And the more prosperous you are, most of the time, the less resentful you will be and the more peace you will have. We want that for all people," she said.