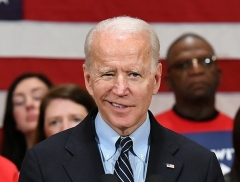 Democrat presidential candidate Joe Biden at a campaign stop in Columbus, Ohio on March 10, 2020, shortly before he went into seclusion at his Delaware home. (Photo by MANDEL NGAN/AFP via Getty Images)

The (liberal) media should start giving Joe Biden more exposure, so the country can see what "sanity, stability, empathy, (and) a sense of calm" he would bring to the nation, Joy Behar of ABC's "The View" said on Friday.

"I mean, we are in pain right now. And we need somebody to take care of us, and I think that man is Joe Biden," she added.

Co-host Whoopi Goldberg asked Behar, "Is it Joe Biden's job to excite the base? Does he need to do that, or does he need to stay the course and get his ducks in order so we can actually hear what he wants to do when he's ready to talk it up? That's the question."

To which Behar responded:

Yeah. Well, he does need more exposure. I'll give him that. I mean, this guy (President Trump) is on every night, bloviating for two, three hours, taking questions, making up stories. Biden could use a little air time, and I think that the media should start giving it to him, starting with us. We should have him here on a regular basis.

And as far as a vice presidential pick, I think that somebody who's going to bring the states that he needs is where that has to go, and somebody who we could see as the next president, who will continue to bring stability and calmness and empathy to a country that's -- that's in pain, basically. I mean, we are in pain right now.

And we need somebody to take care of us, and I think that man is Joe Biden.

Behar said Donald Trump "has provided more excitement than I ever wanted or needed in my life, and the incompetence that goes along with it, for a lifetime.

“And, I mean, I like, I find Kim Kardashian exciting, but I don't want her to be president, either, you  know. So I have had enough excitement for a while."