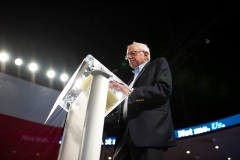 Sen. Rand Paul (R-KY) drew a comparison between the 2017 shooting of Rep. Steve Scalise (R-LA) and the Jan. 6 Capitol riot on the "Mark Levin Show" Tuesday, reasoning that because there were not any calls to impeach Sen. Bernie Sanders (I-VT) after the former event, former President Donald Trump should not be impeached after the latter event.

Paul called the trial “reminiscent of third world countries” and “dead on arrival,” since the Senate needs a two-thirds vote to convict Trump, but 45 senators have already deemed the impeachment illegitimate.

Levin pointed out that it was “shocking” that “five Republicans voted against the Constitution and yet most of them claim to be constitutionalists."

Comments from the media did not escape Sen. Paul, who said “now every network on television is telling us that there is, without question, that was an incitement to an insurrection, and if you disagree with them, you need to go to a camp because you don’t understand the truth. This is the truth as they describe it."

Mark Levin: Sen. Rand Paul! How are you, sir?

Sen. Rand Paul: Very good, thanks for having me.

Levin: Well, it’s a pleasure. I really want to thank you for your battle that you’re fighting on behalf of America and the Constitution. You went to the floor of the Senate today and you had the Senate vote on a particular matter that’s very, very important when it comes to impeachment, when it comes to separation of powers, when it comes to private citizens. Tell me what happened today.

Paul: Well, you know, there are constitutional motions where you can challenge the Constitution and they are privileged motions, and so contrary to what everybody else wanted, I said I want to find out at the very beginning, at the outset, I want to know whether or not we can have a vote on the constitutionality. So I was told, "boy, you shouldn’t be doing this *unintelligible*," but I did it anyway and the vote was quite interesting: 45 Republicans voted that you can’t impeach a private citizen. And the downside is the Senate set the precedent today with 50 Democrats and five Republicans that you can impeach a non-president, and I think that’s a real problem because I think it will lead to great mischief. We talked with Professor [Jonathan] Turley at lunch today and his fear is that this becomes a tool and becomes weaponized. And this idea that you can do an impeachment with no hearings, no witnesses, sort of a snap impeachment, send it over, and then you can impeach, you know, one of my friends said "well maybe we should impeach FDR next" and I said "I might vote for that," but, you know, it becomes ridiculous, this idea of impeaching people who are no longer in office. So we had the vote, and one of the purposes of the vote was to determine what the body would say with constitutionality, but the other purpose was to put people on-record as to what they thought of this hearing, and the fact that 45 people think it’s an illegitimate hearing means that there’s no chance of impeachment, so everything else now is a charade, that impeachment is dead on arrival, and we’ve set that from the very get-go now, so now we know that everything the Democrats will do from here on out is theater because they cannot possibly win.

Levin: Well you know, Senator, another thing shocks me: Five Republicans voted against the Constitution and yet most of them claim to be constitutionalists. It is shocking, and I see this more often, but it is shocking for that to happen, because now they have essentially destroyed the impeachment clause with what the House did, which was a 2-hour debate, one hour each side. No due process. No hear-- What kind of countries do that? Fascistic or Marxist countries, right?

Paul: Yep. You’re right, it's reminiscent of the third world and its very disappointing. The thing that I think some of them make this decision on is, see, the left wing has made it over and over, they say on television every night, that there was an incitement to an insurrection. And so in the floor in my discussion when I debated this cause today, I pointed out that there’s a lot of Democrat rhetoric and words that have led to violence, but not once have Republicans stood up said "oh, we should impeach someone." I’ll give you a good example: I was at the ball field when the Bernie Sanders supporter showed up and shot Steve Scalise, almost killed him, shot four other staffers, shot one of the staffers 10 feet from me. It was a very violent episode, but as the guy was shooting at us, he was saying “this is for healthcare," and at that time, the Democrats were saying that the Republican health care plan was “you get sick and then you die.” You can see how that kind of language might have incited this person. But I never in my wildest dreams or any kind of sense of fairness would’ve said “oh we need to have a hearing to impeach Bernie Sanders, and that it’s his fault that this crazed gunman came.” No, this gunman was diluted, but diluted by rhetoric like the Democrats were saying. But still, to say that Democrats would be responsible for that violence would be irresponsible. But then we look at the president’s speech where he says “go take back our country, fight for our country, march peacefully and patriotically" and now every network on television is telling us that there is, without question, that was an incitement to an insurrection, and if you disagree with them, you need to go to a camp because you don’t understand the truth. This is the truth as they describe it.