Idaho Female Runner Against Biden’s Transgender Order: ‘Very Un-Motivating to Lose to a Biological Male in Your Sport’

Idaho State University runner Madison Kenyon, who opposes transgender “women” (biological males) competing in women’s sports, said that Idaho’s ban on transgenders in girls’ sports is positive, and that efforts to allow biological males to compete against biological females are wrong and unfair to women.

Idaho’s ban, the Fairness in Women’s Sports Act, is being challenged in the courts. In addition, Democratic President Joe Biden issued an executive order on Jan. 20 mandating that any schools or institutions receiving federal funds must allow biological males (transgender women) to compete in women’s sports. 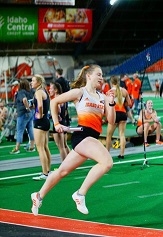 “It’s super frustrating and very un-motivating to lose against a biological male in your own sport,” Madison Kenyon told Fox & Friends on Feb. 1, accompanied by her attorney, Christina Holcomb, with the Alliance Defending Freedom (ADF).

“This is important to me because I've experienced it,” said Kenyon.  “I know how un-motivating it is and how frustrating it is to lose to a biological male and to see them on the podiums in the female sports, and I don't think any other females should have to experience that.”

Attorney Holcomb, who represents Kenyon and another cross country/track athlete, Mary Kate Marshall, said that the transgender directive “sends a message loud and clear to female athletes like Madison: that you don't matter to this administration.”

“Frankly, federal law does not matter to this administration,” said Holcomb, “because federal law is really clear that we have women's sports as a separate category to ensure that female athletes get to be champions and get to have a fair and level playing field.”

The executive order issued by President Biden says the following,

“Section 1.  Policy.  Every person should be treated with respect and dignity and should be able to live without fear, no matter who they are or whom they love.  Children should be able to learn without worrying about whether they will be denied access to the restroom, the locker room, or school sports.  Adults should be able to earn a living and pursue a vocation knowing that they will not be fired, demoted, or mistreated because of whom they go home to or because how they dress does not conform to sex-based stereotypes.  …  All persons should receive equal treatment under the law, no matter their gender identity or sexual orientation.” (Emphasis added.)

Female athletes continue to worry about the implications of allowing biological males to compete in their sports. Consequences of one male athlete joining could result in a missed scholarship, victory, or athletic opportunity.

The Independent Womens Forum posted on Twitter, “Every time a transgender woman secures a spot on an elite women’s team or wins a scholarship reserved for female athletes, a biological female loses an opportunity.