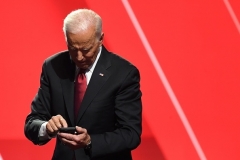 (CNSNews.com) – Confronted by a tweet from former Vice President Joe Biden criticizing his response to the coronavirus pandemic, President Trump said Sunday the tweet was not written by Biden but “by a young man that got very good grades at a very good school.”

Trump, a prolific tweeter himself, was speaking during a “virtual town hall” event broadcast by Fox News.

Host Bret Baier drew his attention to a recent tweet on Biden’s Twitter feed responding to Trump’s criticism of the Obama administration.

“We left a playbook. He ignored it,” the tweet read. “We created an office for pandemics. He gutted it. We had CDC officials in China to detect and contain outbreaks. He pulled them out. Trump can try and shift blame all he wants, but the fact is his actions left us unprepared.”

“First of all, Joe Biden didn’t write that,” Trump retorted. “That was written from a young man that got very good grades at a very good school. That was not written by him. I promise you that.”

Trump then said that after he restricted travel from China in early February – doing something that nobody had wanted to do – “Joe Biden said, ‘he’s xenophobic. He’s a racist.’ They called me a racist.”

The Biden campaign has disputed in the past that the Democratic presidential candidate had written a letter and apologized.

Biden’s campaign did issue a statement a month ago, on a Friday, saying the candidate supported the travel ban that barred entry to any non-U.S. national who has visited China in the previous 14 days. He did not apologize.