When asked about the FBI raid on former President Donald Trump's home in Palm Beach, Fla., professor, author, and political commentator Victor David Hanson said, "right now, we don't have the rule of law in Washington," and added that, "The FBI is beyond redemption."

Hanson, who was awarded the National Humanities Medal by President George W. Bush, made his remarks on the Aug. 9 edition of FNC's Tucker Carlson Tonight, guest-hosted by Will Cain.

Cain asked Hanson why the FBI raided Mar-a-Lago and why were they targeting Trump.

"Well, they're afraid in the short term," he said, in reference to the Democrats and the left, "but in the long term they believe they're morally superior to America, and therefore any means necessary or justifiable for their morally superior ends."

"And right now, we don't have the rule of law in Washington," said Hanson. "Whether you're targeted or exempt depends on your ideology."

Hanson, the professor emeritus of Classics at California State University-Fresno, is the author of 22 books, including The Case for Trump and The Dying Citizen: How Progressive Elites, Tribaliam, and Globalization are Destroying the Idea of America.

He continued, "So in the past when there was a dispute over the Archives or presidential papers, Barack Obama just said, 'I'm not going to turn them over to the Freedom of Information. He spent $30 million resisting efforts to do that. George Bush had an Executive Order and said, 'You know what, I'm not going to do this.' And that was adjudicated." 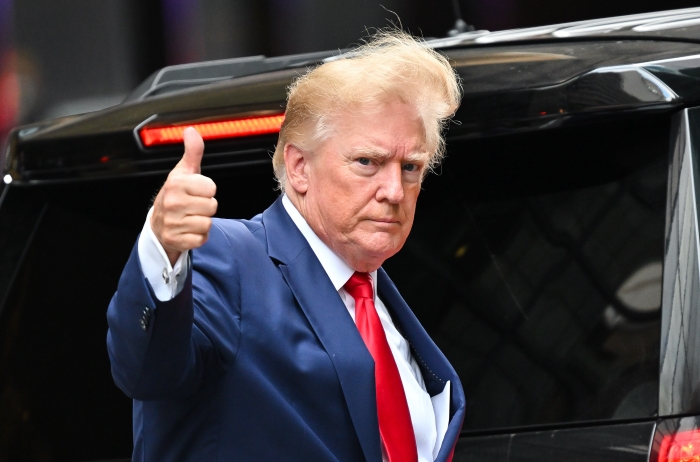 "Now we go after a president and go to his house with 30 agents," said Hanson.  "In the past, when a high official was called for a congressional subpoena, Eric Holder just said, 'I'm not going and I'm not turning over any of this fast and furious.'"

"The idea that you would put him in shackles or you confront him with his family and grab his phone is just ridiculous," said Hanson.  "But this is what we're doing on an ideological basis."

"And when you start to do that, you don't have a democracy anymore," he added. "And I don't think we do."

Hanson went on to criticize the Jan. 6 committee, comparing it to the authoritarian committees of the French Revolution headed by Robespierre.

"To be on that Committee, you have to have one criteria and you have to vote to impeach Donald Trump," said Hanson. "If you're a Republican there was one other qualification, you had to be politically inert with no future and it was deductive." 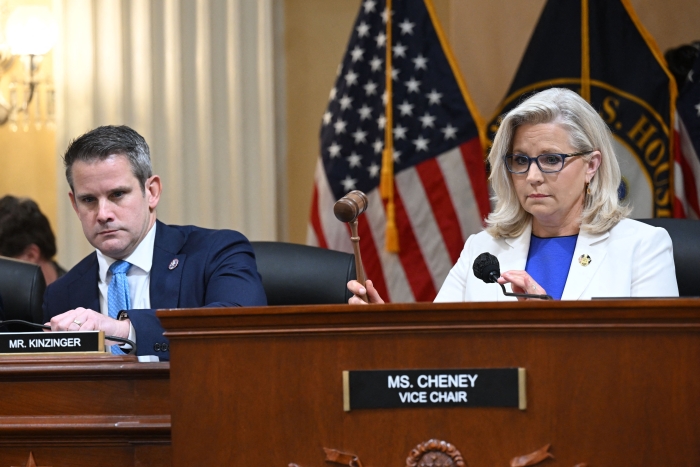 US Representative Liz Cheney (R-WY) and US Representative Adam Kinzinger (R-IL) arrive to a hearing by the House Select Committee to investigate the January 6th attack on the US Capitol in the Cannon House Office Building in Washington, DC, on July 21, 2022. (Getty Images)

As for the FBI, Hanson remarked, "I never thought I would say this: The FBI is beyond redemption. It is -- all of its bureaus and its institutions that have to be farmed out and broken up. If you have a warrant, an FBI warrant, there is no guarantee that that has not been altered. If you subpoena and you want FBI records on phones ... they will be wiped clean."

"We just saw [FBI Director] Christopher Wray and he just stonewalled every question and then he flew on an FBI plane, our plane, a luxury jet because he had to go to his own vacation spot. He took over, remember, from Andrew McCabe -- what did he do? He lied four times to federal investigators, and his wife was running for an office with Clinton-related PAC money while he was investigating Hillary Clinton's e-mail scandal." 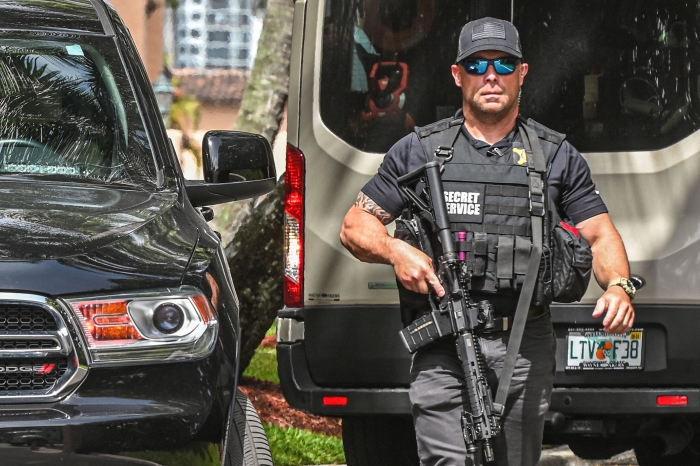 A member of the Secret Service is seen in front of the home of former President Donald Trump at Mar-A-Lago in Palm Beach, Florida on August 9, 2022. (Getty Images)

"[McCabe] took over from James Comey who leaked confidential memos written on FBI devices to the media," added Hanson, "and then when he was called before Congress, on 245 occasions, he said, he didn't know or didn't remember."

"All of this is destroying this country," said Hanson. "And it comes from the people who warned us democracy dies in darkness, and they have descended upon us, the greatest cloud of autocracy and illiberality in the history of this Republic. ... [L]et's pray to God the Republicans can save us."