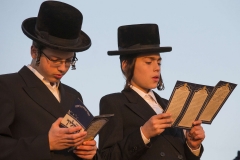 A Ukrainian police official recently directed the Jewish Committee in the city of Kolomiya to turn over the names of every Jew in the community, including their cell phone numbers and their addresses, reported CBN News and other media.

The head of the Ukrainian Jewish Committee there, Eduard Dolinsky, described the situation as "open anti-Semitism."

As Dolinsky said in a May 10 tweet, with a picture of the letter/request from the police, "Ukraine’s National Police department demanded from the Jewish community of Kolomiya to provide police the list of all Jews with addresses and mobile phones and Jewish students in universities with addresses and phones. It is explained as fight against transnational criminal gangs."

The letter, dated Feb. 18, 2020, was signed by Myhaylo Bank, a police officer who runs an anti-organized crime unit.

Jacob Zalichker, who also leads the Jewish community in Kolomiya, "refused to provide the requested information and said he would only comply if he receives a court-ordered warrant," reported CBN News.

“It’s a total disgrace and open anti-Semitism,” Dolinsky told the Jewish Telegraphic Agency. “It’s especially dangerous when it comes from a law enforcement agency that we have to fight the very thing it is perpetrating.”

The National Police of Ukraine reportedly are investigating the incident in Kolomiya.

According to The Jerusalem Post, "Ukraine historically has a reputation of being rife with antisemitism. Whether or not such a reputation is justified, the antisemitic stereotype of Ukraine exists to this day, in particular among Diaspora Jews and their sympathizers in various parts of the Western world."

The Post also noted, however, that Ukraine's current president and prime minister are Jewish.