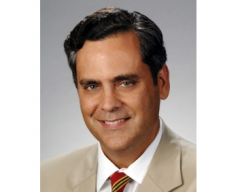 (CNSNews.com) -- Jonathan Turley, a professor of Public Interest Law at George Washington University, constitutional scholar, and columnist, said the censorship tactics of Apple, Google, Facebook, and Twitter present a "major threat to free speech," and raise questions about a new form of "state media where companies advance an ideological agenda with political allies."

"[W]e are witnessing the death of free speech on the Internet," he said at his legal blog on Jan. 11.

In recent days, Twitter has closed President Donald Trump's account (where he had over 80 million followers), and Facebook has suspended the president's account through the end of his term. Apple and Google, meanwhile, have stopped providing the app for Parler, an alternative free speech platform.

The tech giants want Parler to comply with their restrictions and apply the censorship policies that they want.

"So Parler can operate only if Apple and Google are satisfied that it is engaging in the same controversial policies of censorship," said Prof. Turley. "Parler is based on the original concept of the Internet as an open forum for free speech."

"I admittedly know little about Parler," he said, "but it does not matter beyond the fact that this is an alternative forum for free speech."

In addition to Trump, other conservative voices and organizations have seen their social media accounts either suspended or severely limited. These include Lt. Gen. Michael Flynn, attorney Sidney Powell, former White House adviser Steve Bannon, and talk radio hosts Mark Levin and Dan Bongino, among many other people.

Ironically, many writers, editors, and academics support the censoring of conservative voices.

"We have have been discussing how writers, editors, commentators, and academics have embraced rising calls for censorship and speech controls, including President-elect Joe Biden and his key advisers," said Turley.

"The erosion of free speech has been radically accelerated by the Big Tech and social media companies," he added.  "The level of censorship and viewpoint regulation has raised questions of a new type of state media where companies advance an ideological agenda with political allies." (Emphasis added.)

"If Pelosi demanded that Verizon or Sprint interrupt calls to stop people saying false or misleading things, the public would be outraged," said Turley.  "Twitter serves the same communicative function between consenting parties; it simply allows thousands of people to participate in such digital exchanges."

"Those people do not sign up to exchange thoughts only to have [Jack] Dorsey or some other internet overlord monitor their conversations and 'protect' them from errant or harmful thoughts," Turley concluded.

As for why so many writers, editors, and academics support the censorship and "canceling" of conservative voices, a similar question was asked of the writers and academics of 1930s Germany.