Trump: America's Greatness Happened Because of 'Jesus Christ and His Followers and His Church' 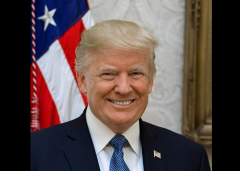 Speaking at First Baptist Dallas church on Sunday, former President Donald Trump stressed that the great achievements in America are due precisely to the Judeo-Christian beliefs and practices of its citizens.

"[N]one of this could’ve ever happened without Jesus Christ and His followers and His church. None of it," said Trump.

First Baptist Dallas, founded in 1868, has an estimated 14,000 members and is headed by Pastor Robert Jeffress, 66.  Jeffress served on Trump's Evangelical Advisory Board and White House Faith Initiative.

“More than 2,000 years ago ... an angel of the Lord appeared to humble shepherds and proclaimed the reason for our Christmas joy," said Trump in his remarks.  "'For unto you is born this day in the city of David a Savior, which is Christ the Lord.'"

"Our country needs a savior right now and our country has a Savior -- and that’s not me," said Trump.  "That’s somebody much higher up than me. Much higher up."

"We just do what we have to do," he continued. "But the life and death and resurrection of Jesus Christ forever changed the world. It’s impossible to think of the life of our own country without the influence of His example and of His teachings."

"But none of this could’ve ever happened without Jesus Christ and His followers and His church," said Trump, who was raised Presbyterian. "None of it. And we have to remember that Jesus Christ is the ultimate source of our strength and of our hope. And here and everywhere and for all time -- Jesus Christ."

Jesus preaches His sermon on the Mount. (Screenshot, YouTube)

"Let us thank Almighty God for our nation, for our precious freedoms, and most of all -- and I have to say this -- for the gift of God‘s everlasting mercy and grace," said the former president. "We ask God to bless our nation and our people with faith and hope and love and peace.”

Commenting on Trump's remarks, Rev. Franklin Graham tweeted, "Do you miss him? I do."