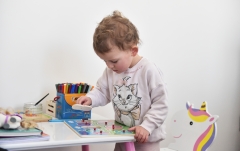 A U.S. study funded by the National Institutes of Health reveals that children born during the COVID pandemic are scoring lower in cognitive ability (general intelligence) than children born prior to the pandemic, according to the British Medical Journal (BMJ).

The study, by researchers at Rhode Island Hospital and Brown University, is awaiting peer review before publication in JAMA Pediatrics, stated the BMJ, which has reviewed a preprint of the study.

"[T]he closest thing we’ve seen in other research -- and this is horrible, not a good comparison to be making -- is the studies that were done of orphans in Romania," said Dr. Sean Deoni, pediatrician and lead author of the  study.

"The effects of institutionalization and lack of interaction on them were profound, but what we’re seeing here is on par with that," he added.

As reported in the BMJ, "In a longitudinal study of 672 children from Rhode Island that has run since 2011, those born after the pandemic began [in 2020-21] showed results on the Mullen scales of early learning that corresponded to an average IQ score of 78, a drop of 22 points from the average of previous cohorts."

The children born in 2019 did not show declines in the intelligence scores, according to the researchers.

"Their trajectories of maturation were unaltered,” said Dr. Deoni. “They seemed to be doing alright. It’s really affecting those born during the pandemic, whether through transference from their mother, what she’s experiencing during late term pregnancy, or during those crucial earliest months after birth.”

The detriment is also greater among boys than in girls, according to the report.

The researchers think that the drop in general intelligence scores is likely due to "reduced interaction with parents and less outdoor exercise ... along with effects that occurred during pregnancy."

Dr. Deoni added that preliminary data in a separate study show that, "what we are seeing, anecdotally, is a significant depression in the number of words spoken to kids and, as you can imagine, a massive increase in TV exposure, and a decline in meaningful conversations. Time spent engaged with a caregiver is way down.”

Writing in Forbes about the study, medical expert William A. Haseltine said, "The first 1,000 days of a child’s life are an important and sensitive period of child development. Environmental factors, including maternal mental and physical health, nutrition, stimulation, and supportive caregiving can affect the developing fetal and infant brain. The researchers found that even in the absence of direct infection, the environmental changes associated with the pandemic are significantly and negatively affecting infant and child development."

"With the isolation, lack of family or caregiver support, and limited stimulation and socialization enforced by Covid-19 public health guidelines, many infants have been deprived of normal developmental experiences," said Haseltine.

"Due to the financial stressors of the pandemic and limited childcare options, home environments have also become more stressful and unstable," he wrote. "Forced to simultaneously juggle work and childcare, parents may not be able to devote significant time to creating enriching environments for infants."