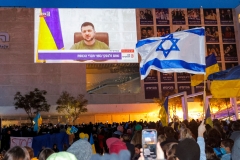 Demonstrators gather at Habima Square in the centre of Israel's Mediterranean coastal city of Tel Aviv on March 20, 2022 to attend a televised video address by Ukraine's President Volodymyr Zelensky. (Photo by JACK GUEZ/AFP via Getty Images)

Several Israeli leaders sharply criticized Ukrainian President Volodymer Zelensky after his online-speech to the Knesset on Sunday, dismissing his comparison of Russia's invasion of Ukraine to the Holocaust and the "Final Solution" as "outrageous" and bordering on "Holocaust denial."

One Israeli government official also faulted Zelensky for distorting "the part his country played in the murder of the Jews," reported The Times of Israel and Ynet News.

In his speech, Zelensky, who is Jewish, made numerous references to the Holocaust and the Nazis.

"Listen to the language the Kremlin uses, they use the terminology of the Nazi Party," said Zelensky.  "They called it the 'Final Solution' to the Jewish question. You remember well, I'm sure, you'll never forget." 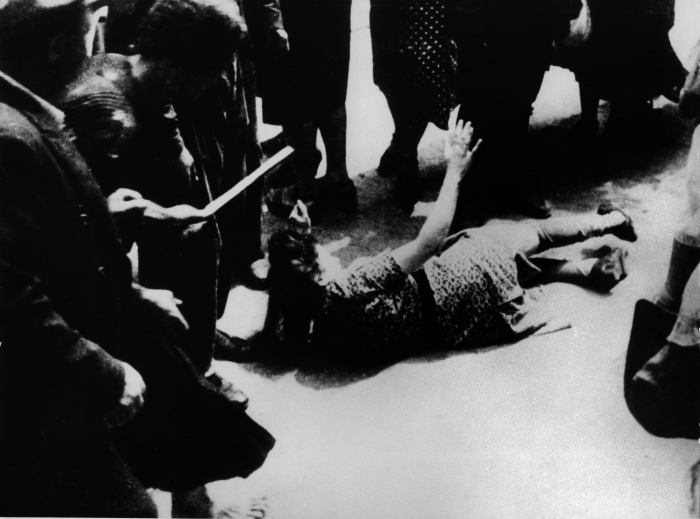 The lynching of four Jewish women at the hands of many Nazi sympathizers among the population of the city of Lviv, Ukraine: as soon as the Soviet troops left the city, excited by the supervened SS, they sparked a succession of pogroms. About 6000 Jews were killed in the city in one month, 2000 of them on 25 July. In the image, one of the victims. Still frame from a spontaneous movie, Ukraine, Lviv, July 1941. (Photo by Fototeca Gilardi/Getty Images)

"Now Moscow uses the words 'Final Solution' again regarding us, Ukraine," he added. "We see this on their official websites, there are quotes in the Russian media. This is what was said in Moscow. Without the war against Ukraine, they could not have secured the final solution to their security, just as was said 80 years ago."

Zelensky also noted that the date when Russia invaded Ukraine, Feb. 24, "was the same day that the Nazi Party was founded in Germany in 1920," reported The Times of Israel.

“102 years after the Nazis, the order was given to begin the Russian invasion of Ukraine, which has already killed thousands of people and left millions without a home,” he said. “They’ve become refugees...."

In response to Zelensky's speech, Israel's Communications Minister Yoaz Hendel noted that part of the Nazis' genocide of the Jews "was also carried out on Ukrainian land," and tweeted, "The war is terrible, but the comparison to the horror of the Holocaust and the Final Solution is outrageous." 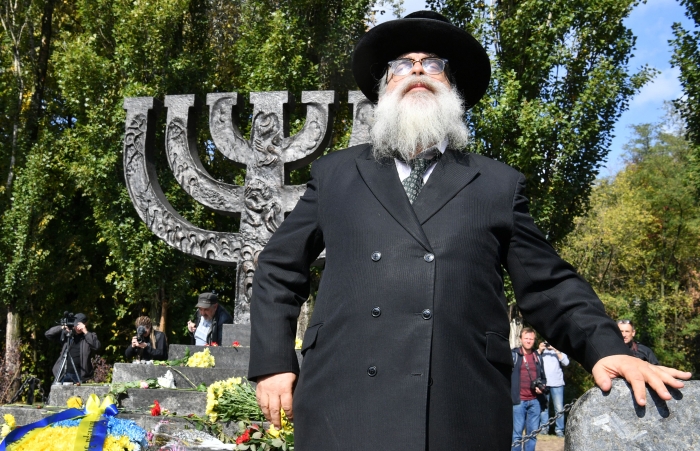 A rabbi prays in front of the Minorah Monument at the Babyn Yar (Babi Yar) Holocaust Memorial in Kiev, on September 29, 2019, during a mourning ceremony marking the 78th anniversary of the beginning of mass execution of Jews in September 1941. - The Babi Yar (Babyn Yar) ravine in Kiev, was the location where Nazis shot dead several tens of thousands of Jews between 1941-1944. (Photo by SERGEI SUPINSKY/AFP via Getty Images)

"I admire the Ukraine president and support the Ukrainian people in heart and deed, but the terrible history of the Holocaust cannot be rewritten," said Hendel.

Yuval Steinitz, who serves in the Likud Party in the Knesset, remarked, "It is said that a person should not be judged in times of distress, but had the speech of Zelensky, the Jewish president of Ukraine, been delivered on normal days, it would have been dismissed as borderline Holocaust denial."

“War is always a terrible thing," said Steinitz, "but every comparison between a regular war, as difficult as it is, and the extermination of millions of Jews in gas chambers in the framework of the Final Solution is a complete distortion of history."

Knesset Member Bezalal Smotrich, head of the Religious Zionism party, said Zelensky's "criticism of Israel was legitimate, as was his raising expectations of us, but not his infuriating and ridiculous comparison to the Holocaust and his attempt to rewrite history and to erase the role of the Ukrainian people in the attempts to exterminate the Jewish people," reported The Jerusalem Post.

Religious Zionism MK Simcha Rotman rejected Zelensky's historical comparisons. “I don’t understand Ukrainian, but if the translation I heard is accurate, Zelensky asked us to treat Ukrainians the same way they treated us 80 years ago. I’m sorry, but I think we will have to reject his request. After all, we are a moral nation. A light among nations,” said Rotman, as reported in The Times of Israel. 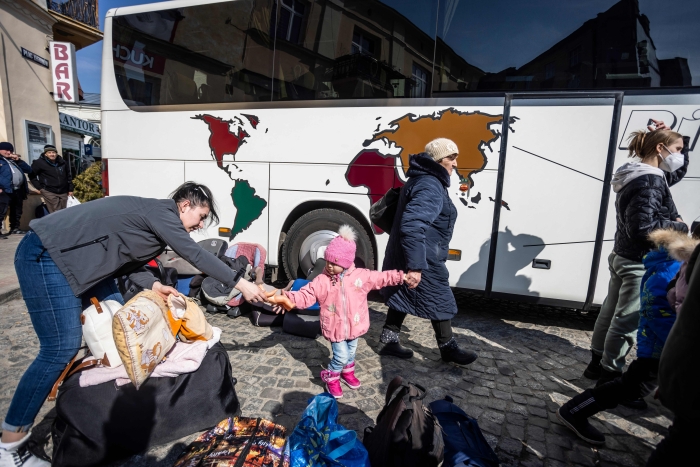 Refugees from Ukraine prepare to board a free bus which will take them to Germany, in front of railway station in Przemysl, southeastern Poland, on March 20, 2022. - Ten million people -- more than a quarter of the population -- have now fled their homes in Ukraine since Russia's invasion on February 24, 2022. (Getty Images)

Yad Vashem, the World Holocaust Remembrance Center in Israel, told the Associated Press, “Propagandist discourse accompanying the current hostilities is saturated with irresponsible statements and completely inaccurate comparisons with Nazi ideology and actions before and during the Holocaust. Yad Vashem condemns this trivialization and distortion of the historical facts of the Holocaust.”

An Israeli government official, who asked to remain anonymous, told Ynet News that "the Ukrainians slaughtered Jews, many Jews. There were also Righteous Among the Nations, but the majority slaughtered Jews. Don't he dare distort history."

As explained by Ynet News, "During World War Two, many Ukrainians had collaborated with the Nazis in their invasion of the Soviet Union and partook in some of the atrocities committed against Jewish people, most notably the Babi Yar massacre, in which over 33,000 Jews were systematically exterminated over the span of two days."

Despite the collaboration with the Nazis, many Ukrainians also collaborated with the Russians (Soviet Union) in its counter-offensive against the Germans, which helped lead to the defeat of the Third Reich. In the mid-1930s, about 4 million Ukrainians were killed in a man-made famine orchestrated by Soviet dictator Joseph Stalin.  (Many Ukrainians were also executed outright by the Soviets.) 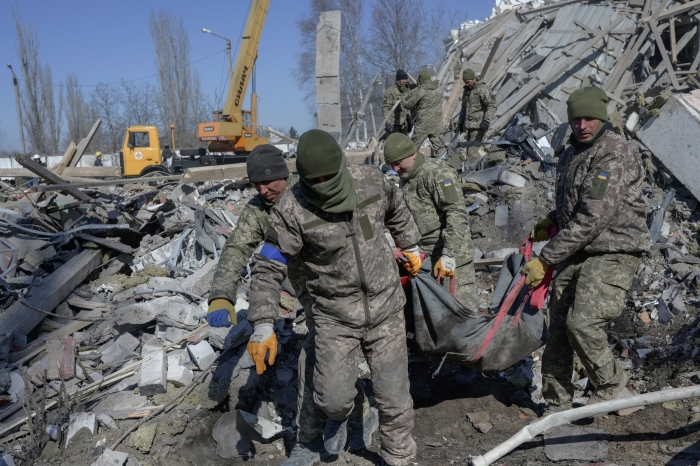 Ukrainian soldiers carry a dead soldier through debris at the military school hit by Russian rockets the day before, in Mykolaiv, southern Ukraine, on March 19, 2022. (Getty Images)

In his speech, Zelensky pleaded with Israel to provide Ukraine with weaponry to fight the Russians, and asked why Israel has not imposed sanctions on Russia.

“You know how to defend your interests and help Ukraine," said Zelensky. "To defend Ukrainians. To protect the Jews of Ukraine. We can ask many times why we’re not getting weapons from you, why Israel hasn’t imposed serious sanctions on Russia."

“You need to provide answers to these questions and live with them," he added. “People of Israel, you too now have a choice."

Israel reportedly has provided substantial humanitarian aid to Ukraine but not military weapons.

On Sunday, March 20, Zelensky banned 11 political parties in Ukraine from engaging in "any activity," reported The Week. He also instituted a "unified information policy," which combines "all national TV channels, the program content of which consists mainly of information and/or information-analytical programs, [into] a single information platform of strategic communication" called "United News."

Zelensky said the step was necessary to "combat Russian information and 'tell the truth about the war,'" reported The Week. 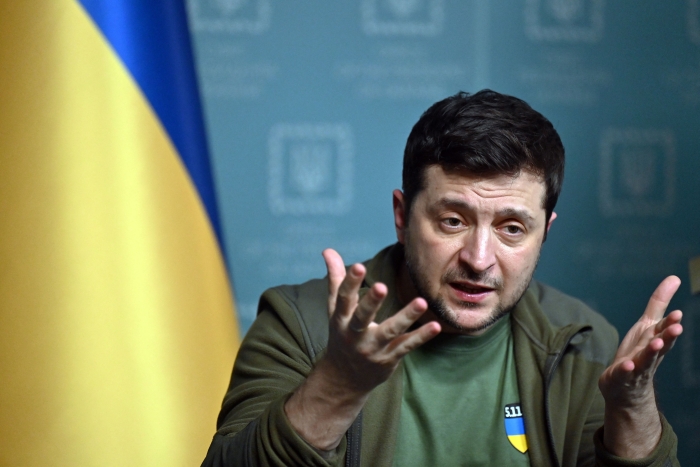