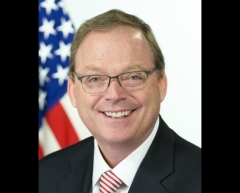 Kevin Hassett, the senior economic adviser to President Trump and former chairman of the president's Council of Economic Advisers, said that in the next report on jobless claims he expects the national unemployment rate to be "close to 20%."

The unemployment rate for April was 14.4%, up from 4.4% in March, according to the Bureau of Labor Statistics.

On CNN's State of the Union, May 10, host Jake Tapper asked Hassett, “How high do you think unemployment is going to get this year?”

Hassett replied, “I think, just looking at the flow of initial [jobless] claims, it looks like we're probably going to get close to 20 percent in the next report," the May report.

This will depend, he added, "on whether the virus is really abated by that point and economies are really getting going again, then it could start to head down from there."

"But I would guess middle of the summer is when we’re going to start to go into the transition phase," said Hassett. "Then, I expect by the second half of the year the CBO forecast is what we hope will be right, which will be that you’ll have very strong growth in the third and fourth quarter."

According to the Congressional Budget Office (CBO), the "unemployment rate is projected to average 15 percent during the second and third quarters of 2020, up from less than 4 percent in the first quarter. ... The increase in that rate in the second and third quarters reflects the net effect of a projected loss of nearly 27 million in the number of people employed and the exit of roughly 8 million people from the labor force."

However, the "labor market is expected to improve after the third quarter, with a rebound in hiring and a significant reduction in furloughs as the degree of social distancing diminishes," said the CBO, "leading to an increase in business activity and an increase in the demand for workers. In particular, the unemployment rate is projected to decline to 9.5 percent by the end of 2021."