Sen. Hawley: 'FBI Deliberately Interfered in Not One But Two Separate Presidential Elections'

In reference to Twitter documents showing that the FBI pressured Twitter employees to censor news-posts the agency apparently did not like, claiming they were "misinformation," Sen. Josh Hawley (R-Mo.) said the records show "the FBI deliberately interfered in not one but two separate presidential elections" -- in 2016 and 2020.

Speaking with reporters on Capitol Hill, Dec. 20, Hawley said news about the pending arrival of Ukrainian President Volodomyr Zelensky to speak before Congress was "state propaganda to cover for the fact, to distract attention from the fact that what we learned and what we have been learning is that the FBI deliberately interfered in not one but two separate presidential elections."

.@HawleyMO: The FBI deliberately interfered not one, but two separate presidential elections... there have got to be repercussions for that.

We're going to have to have a conversation about the future of the FBI and what it's doing in our democracy. pic.twitter.com/I3WOcCC3XN

As reported by OAN, Hawley continued, "The idea that the FBI who laundered the Steele dossier back in 2016 through the courts, lied to a FISA [Foreign Intelligence Surveillance Act] court in order to extend their wiretaps that they never should have gotten in the first place. Then in 2020, deliberately suppressed the Hunter Biden story."

"Remember, the FBI had the Hunter Biden laptop for a full year before the story broke," said Hawley. "They knew all about it. They had all the emails, knew it was true, and yet put out there that it was Russian disinformation. And we see now with Twitter, went after Twitter until Twitter agreed to censor it and take it down.”

“That’s unbelievable stuff," said the senator.  "There have got to be repercussions for that, or we’re not going to have a democracy." 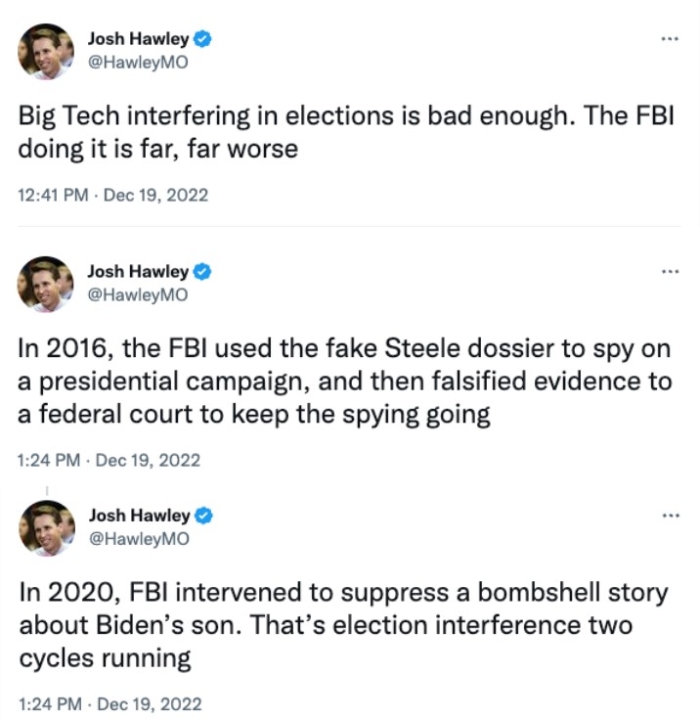 "And we’re going to have to have, clearly, a conversation about the future of the FBI and what it’s doing in our democracy," he added, "because that kind of power, the kind of power that they have is immense."

"And if they’re going to use it in this way, then I have to say, I think our constitutional order is not secure, and I’m very concerned," said the senator.

Hawley did not attend Zelensky's Dec. 21 speech before Congress. He told reporters on Dec. 23, "I didn’t go to the speech because I didn’t want to be part of a photo-op asking for more money from the United States government when they have not given us a single piece of accounting on anything they spent."

“Our European allies are continuing to sandbag,” said Hawley. “We have spent more on Ukraine than all of the Europeans put together, and it’s on their continent.” 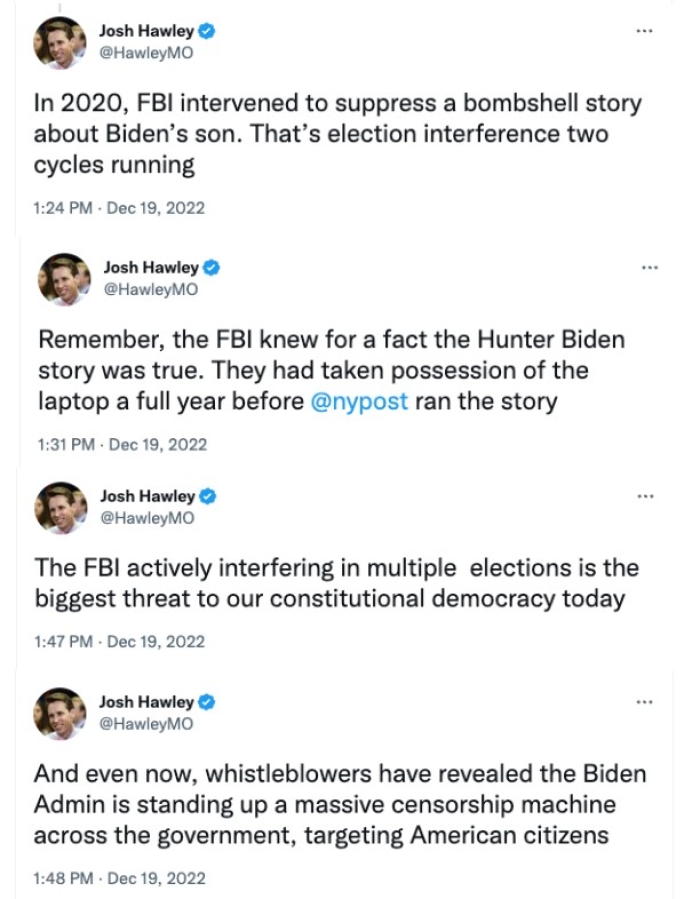 In a Dec. 23 letter to FBI Director Christopher Wray, House Rep. Jim Jordan (R-Ohio) and Rep. Mike Johnson (R-La.) wrote, "We are investigating politicization and abuses at the Federal Bureau of Investigation, as well as Big Tech’s censorship of conservatives online. Newly released information shows the FBI has coordinated extensively with Twitter to censor or otherwise affect content on Twitter’s platform."

"These documents show that the FBI maintained this relationship with Twitter apart from any particularized need for a specific investigation, but as a permanent and ongoing surveillance operation," said the congressman. "These revelations sadly reinforce our deep concerns about the FBI’s misconduct and its hostility to the First Amendment."