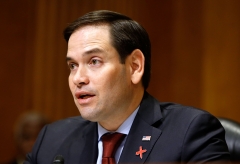 Senator Marco Rubio (R-Fla.), the interim chairman of the Senate Intelligence Committee, said that the 37 Planned Parenthood affiliates that received $80 million in Payment Protection Plan (PPP) loans through the Small Business Administration (SBA) did not qualify for the loans and must return the money.

He added that the people responsible for allowing these loans to Planned Parenthood, including potentially officials at the SBA, should be held accountable.

On Fox & Friends, May 20, co-host Ainsley Earhardt, said to Rubio, "the average [PPP] loan  that a small business got was $118,000, but look at the number that Planned Parenthood got: 37 Planned Parenthood affiliates that received $80 million in loans.  One of them in California got $7.5 million. … You say they have violated the rules – explain how.”

Senator Rubio said, “They just don’t qualify for it. There’s something called affiliation rules, and this is if there is some independence between an affiliate and a parent company, then each affiliate is allowed to apply on their own."

"In this particular case, in order to be a Planned Parenthood affiliate, you have to get approval of the parent board, the one that’s located here in Washington, D.C.," said Rubio. "A parent board or a parent organization that is sitting – according to their own numbers from 2018 – on close to half-a-billion in net assets. Half-a-billion dollars in net assets to a large, well-funded organization in Washington, D.C. that controls the operation of these affiliates."

"They just don’t qualify under the affiliate rules," he added.  "It’s as simple as that. Leave aside all the other issues, they do not qualify."

He then explained that the SBA and the Trump administration are investigating what happened with the loans to Planned Parenthood.

"A legitimate question is, how did this get through the SBA?" added the senator.  "How did somebody at SBA approve this, knowing that it violated the affiliation rules? It’s as simple as that. … Beyond the politics, they do not qualify for this loan and I’m glad the administration has jumped on it.”

On Tuesday, May 19, Rubio's office released a statement that reads, "There is no ambiguity in the legislation that passed or public record around its passage that organizations such as Planned Parenthood, whose parent organization has close to half a billion dollars in assets, is not eligible for the Paycheck Protection Program."

"Those funds must be returned immediately," said Rubio.  "Furthermore, the SBA should open an investigation into how these loans were made in clear violation of the applicable affiliation rules and if Planned Parenthood, the banks, or staff at the SBA knowingly violated the law, all appropriate legal options should be pursued."

Planned Parenthood is the largest abortion provider in the United States.