Rev. Graham: Siri Directed Cop on How to Be Saved Through Jesus Christ 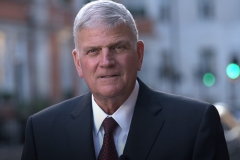 A 48-year-old police officer who was quarantined, riddled with anxiety, and feared he might die from COVID-19, asked "Siri" on his computer, "How can I get saved?" Siri led him to the Billy Graham Evangelistic Association website where he spoke with a BGEA volunteer who helped lead the man to Jesus Christ.

"By the end of their conversation, the officer found what he was looking for -- he put his faith and trust in Jesus Christ!" reported Rev. Franklin Graham on Facebook, May 13.

"Well, Siri sure got this one right!" said Graham. "A 20-year veteran police officer was quarantined and battling anxiety. He was afraid he might have the coronavirus, and he was afraid to face death. He said he wasn’t ready to go."

"He asked Siri, 'How can I get saved?'" said Graham. " Siri led him to our Billy Graham Evangelistic Association website where he chose to chat with one of our trained volunteers who shared from God’s Word how he could find true peace."

"By the end of their conversation, the officer found what he was looking for—he put his faith and trust in Jesus Christ!" reported Graham.  “'For the wages of sin is death, but the gift of God is eternal life through Jesus Christ our Lord'” (Romans 6:23).

"He doesn’t have to be afraid anymore!" said the reverend.

He also provided a link to the story and encouraged people to "share it with anyone you know who might be searching for peace during this time of uncertainty."

The longer story explains that while the officer was talking with the volunteer,  he asked, “Do you wanna know how I found your webpage? I went into Google, and I asked Siri, ‘How can I get saved?’ And your page popped up.”

"He said he had prayed the prayer he found on the site, asking Jesus to be his Savior," the story reads.

"As David began a two-week quarantine, God had given him a gift he hadn’t been looking for—the gift of time," the story says. "The Lord had once again used a temporary crisis to lead one of His children to eternal life. In this time of uncertainty, it’s one more reason to believe God’s Word is always true."